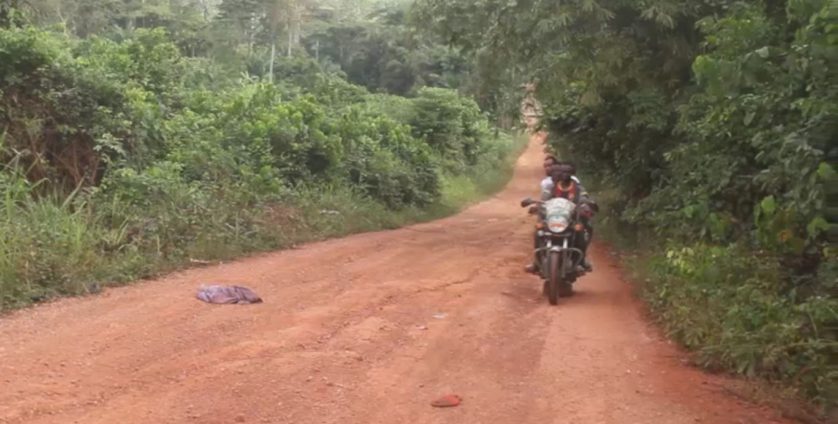 Workers of Ateasefoɔ Mining Company at Upper Denkyira West in the Central Region have appealed for intensified police patrols and security beef up to protect lives in the area.

Other victims who survived the attack say they live in fear.

The 15 miners were on board two vehicles returning to their homes.

Two security men were escorting us on motorbikes. Immediately we got there, they opened fire on the security and shot one of them in the head.

They then began firing on our vehicle until the driver lost control and veered off into a nearby gutter.” He said.

Oliva Martey says two gunmen first came to him and demanded their items.

“I was sitting at the passenger side of our vehicle they then approached us in the car and took my bag.

After searching it, they didn’t get anything in the bag. He then asked me to give them gold. I told them I had none on me, he asked his colleagues to shoot me. They fired into my arm and I fell under the vehicle.”

One of the robbers demanded Oliva handed over gold ore to him or be shot.

The robbers spent about an hour on the miners insisting they offered them gold.

“Those that attacked us were about a dozen. They were armed with AK 47.

I’m a Ga Adangbe, and small scale mining is what I do. I have done that for a long time now.”

A dozen fully-armed robbers participated in the operation.

But the small miners had no money, gold nor any valuables on them at the time.

Leader of the robber gang ordered his boys to kill the miners.

“We had nothing on us. The system we use wouldn’t allow us to carry gold along this road after six days of production.

Their leader instructed that they kill us because they didn’t get anything from us.”

One of the security officers of the mining firm who was meters away exchanged gunfire with the robbers.

“One of our security men called Raster is believed to have been fortified exchanged gunfire with them.

He was fired countless times. He had only his clothes torn.

He managed to gun down one of them and that enabled us to flee.” Oliva told JoyNews Mahmud Mohammed-Nurudeen

It is not the first time such a robbery incident has happened in the area.

Residents say armed robbery in the area is common.
Chief Executive Officer of Ateasefoɔ Mining Company, Kwadwo Obeng appeals to the Upper Denkyira Police Commander to beef up security in the area.