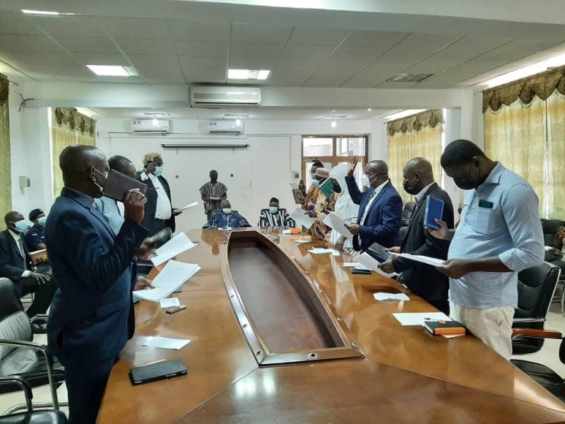 Mr Stephen Yakubu, the Upper East Regional Minister has inaugurated a 10-member Health Committee for the Region with a call on them to work towards resolving land issues the Regional Hospital was going through.

The Minister said the Hospital, which was the major referral centre for the Region, was challenged by agitations of family members and community leaders of the catchment area for payment of compensations which had prevented the fencing of the facility over the years.

Mr Yakubu said the final phase of work on the Regional Hospital was progressing steadily, and charged the Committee to immediately get involved to resolve the compensation issue after assumption of office.

He said a lot of confidence was reposed in them as members of the Committee to work and improve the health delivery system in the Region, adding that it was a national call to duty that had to be taken seriously.

He encouraged members of the Committee to apprise themselves with government’s policies on health in the country, which included the ‘Agenda 111 Hospital,’ free maternal health care, the National Health Insurance Scheme, the Community-Based Health Planning and Services (CHPS) concept among others.

“It is that knowledge which will put members in the right stead to assist the Regional Director of Health Services to implement policies and programmes to improve the health of our people,” the Minister said.

Mr Yakubu said members of the Committee assumed office at a time that Ghana’s health care system was deeply challenged, saying “The COVID-19 pandemic still lingers, having disrupted our health systems and infrastructure, and drained resources.”

Madam Gumah, thanked the Regional Minister on behalf of members of the Committee for the opportunity to serve on the Committee for a three-year period, and assured residents of the Region that they would play their advisory role to effective health delivery.

She described as worrying the 24 maternal mortalities recorded in the just ended half-year performance review of the GHS, and said there was the need for all hands on deck approach to remedy the situation in the Region.

The Chairperson said the Committee would collaborate and work to retain health professionals in the Region, and also initiate innovative measures to attract critical staff, especially Specialist Doctors to the Regional and District Hospitals.

She commended the Regional Minister for his recent visit to the Regional Hospital, where he interacted with management and staff of the facility to boost their morale, and urged them to stay in the Region, and work to improve the system.

“I also appeal to all residents to continue to adhere strictly to the Ghana Health Service COVID-19 protocols,” the Chairperson said.