US boy offers home to Syrian refugee in letter to Obama 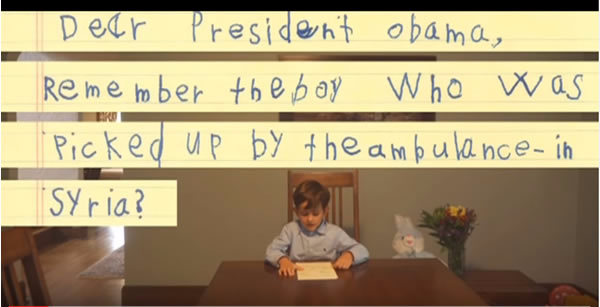 A six-year-old American boy's letter to Barack Obama, offering a place in his family to a Syrian refugee, has gone viral.

Alex, from New York, wrote the letter after seeing the photograph of bloodied and dazed Omran Daqneesh, which prompted outrage around the world.

Mr Obama said the letter was from a child "who hasn't learned to be cynical, or suspicious, or fearful". The video has been shared more than 60,000 times on Facebook.

"Dear President Obama, remember the boy who was picked up by the ambulance in Syria?" Alex wrote in a letter published by the White House.

"Can you please go get him and bring him to our home …we'll be waiting for you guys with flags flowers and balloons. We will give him a family and he will be our brother." 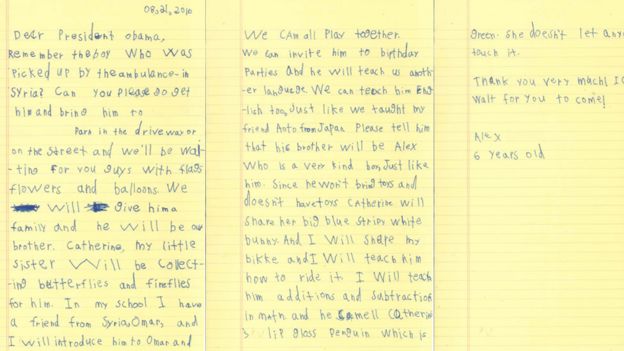 Mr Obama quoted Alex's words at a United Nations summit on the refugee crisis this week, before the White House recorded Alex reading them himself.

"We should all be more like Alex," the President wrote.

"Imagine what the world would look like if we were. Imagine the suffering we could ease and the lives we could save."

On social media, many users applauded the president's approach – but reserved most of their praise for young Alex. 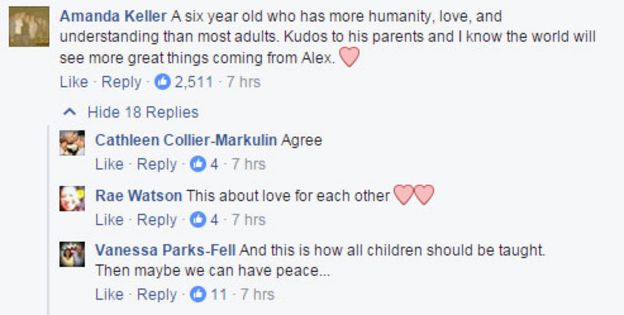 "A six year old who has more humanity, love, and understanding than most adults. Kudos to his parents," a Texas woman commented on Facebook.

"I heard this earlier today, as read by my president," said another. "Even with that pre-conditioning, made me cry while reading it just now.

"Neither of these sweet little boys, someone's sons, are Skittles," she said – referencing a controversial Donald Trump campaign advert likening Syrian refugees to the popular brand of sweets.

The US President has urged developed nations to do more to help refugees from the Syrian crisis. In August, the White House said it had admitted 10,000 Syrian refugees to the United States this year.