US braces for first major snow storm of 2014 - MyJoyOnline.com

US braces for first major snow storm of 2014 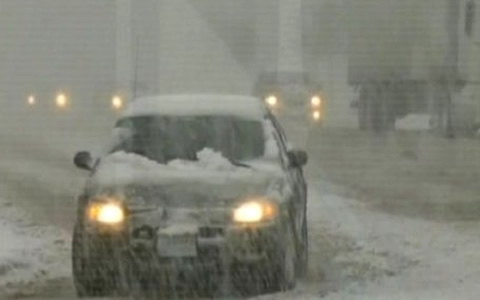 The north-eastern US is preparing for a fierce evening storm that is expected to dump up to 14in (35cm) of snow.

Nearly 2,000 flights have been grounded nationwide as heavy snow falls from Illinois to Michigan in the US Midwest.

Parts of New York and New England are expected to see blizzard conditions, with fast falling snow and wind gusts of up to 45mph (72 km/h).

In Canada, temperatures of -26C (-14F) were recorded in Montreal and Winnipeg, not including the wind chill factor.

Several inches of snow have already fallen in the US north-east, but the strongest part of the storm is expected on Thursday evening into Friday morning.

"We're going to see a lot of snow and a lot of wind," said Jason Tuell, of the US National Weather Service. "We're concerned about whiteout conditions possibly tonight with the blowing and drifting snow."

More than a foot of snow is expected in the Boston area by Friday morning, according to weather officials.

Similar accumulations were also expected in parts of the states of Vermont, New Hampshire and Maine, where many residents were recently without electricity because of an ice storm.

Weather officials have issued a blizzard warning for the Long Island region of New York, where up to 10in of snow is expected.

Some schools have already announced closures for Friday and New York Governor Andrew Cuomo warned commuters to New York City to leave their vehicles at home on Thursday.

"We are looking at a serious storm situation," Mr Cuomo said.

Massachusetts Governor Deval Patrick told non-emergency government employees to leave work at 15:00 local time (20:00 GMT), warning residents not to spent too much time outside because of the frigid temperatures.

"Minimise outside activities… These temperatures are very, very dangerous," he said on Thursday.

Snowy roads have already been blamed for a vehicle crash in Indiana that killed one person and injured more than a dozen after a lorry lost control and hit a bus carrying 50 people.

In Hartford, Connecticut, householder Hal Guy was preparing for the snow by shopping for three snow shovels.

"We broke a couple in the last storm," he told the Associated Press news agency.

"We have four kids, so, three shovels, and we still have a little one back home."

The storm is expected to be an early test for New York City Mayor Bill de Blasio, who was sworn-in on Wednesday.

"Stay indoors to the maximum extent possible," he warned New Yorkers at a Thursday evening news conference. "If you don't need to go out, please don't go out."

He warned snow, frigid temperatures and high winds were expected in the area overnight.

To the south, smaller but still significant amounts of snow are expected in New Jersey and eastern Pennsylvania.