US did not approve Turkey’s Syria offensive, says Mike Pompeo 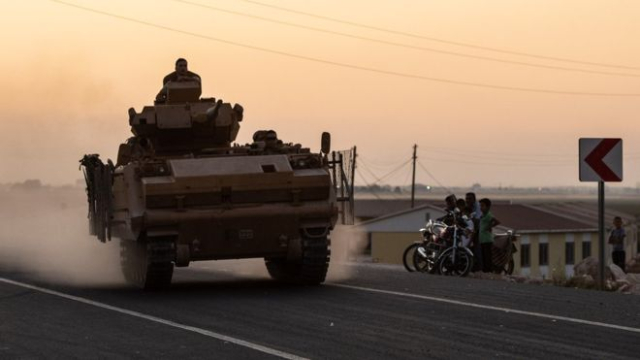 The US did not give Turkey a "green light" for its offensive in northern Syria, US Secretary of State Mike Pompeo has said.

Mr Pompeo defended President Donald Trump's decision to withdraw US troops from the border area, which has sparked an outcry at home and abroad.

Turkey has now launched an assault on territory held by Kurdish-led forces.

President Recep Tayyip Erdogan said the aim was to "prevent the creation of a terror corridor" on the border.

Kurdish-led forces vowed to resist the offensive and have already clashed with Turkish troops.

The Kurds – who helped defeat the Islamic State (IS) group in Syria and were key US allies in that fight – guard thousands of IS fighters and their relatives in prisons and camps in areas under their control. It is unclear whether they will continue to do so if battles break out.

The US military says it has taken custody of two British detainees notorious for their roles in an IS cell that tortured and killed nearly 30 Western hostages.

The two men, El Shafee Elsheikh and Alexanda Kotey, were part of a British cell nicknamed The Beatles.

They have now been removed from a prison run by the Kurdish-led militia in northern Syria.

What did Mr Pompeo say?

In an interview with US broadcaster PBS, Mr Pompeo defended Mr Trump's surprise decision to pull back US forces, adding that Turkey has a "legitimate security concern" and "a terrorist threat to their south".

He said reports the US had allowed Turkey to launch the offensive were "just false".

"The United States didn't give Turkey a green light," he said.

In an earlier statement, Mr Trump – who had threatened to "obliterate" Turkey's economy if it went "off limits" – said the US did not "endorse this attack", calling the operation a "bad idea".

The president later told a press conference the Turks and Kurds "have been fighting each other for centuries", and said that Kurdish fighters "didn't help us in the Second World War, they didn't help us with [the D-Day landings in] Normandy".

"With all of that being said, we like the Kurds," Mr Trump added.

Republicans and Democrats alike have condemned the decision to pull back US troops.

Senator Lindsey Graham – normally a staunch ally of Mr Trump's – said the US had "shamefully abandoned" its ally, and has unveiled a sanctions bill against Turkey with Democratic Senator Chris Van Hollen.

"While the Administration refuses to act against Turkey, I expect strong bipartisan support," he wrote.