The FTSE 100 index fell 2% at the start of trading before paring back some losses to trade 0.7% lower at midday.

Other major European stock markets also fell, with money flowing into safe haven stocks, gold and currencies including the yen.

Traders had expected Hillary Clinton to beat Mr Trump to become the next US president.

France's Cac index and Germany's Dax are each down about 1.5% after heavier falls at the start of trading.

Some analysts have likened the shock of a Trump victory to the Brexit result earlier this year.

However, neither markets nor currencies have swung as wildly as they did after June's EU referendum.

US stock futures fell dramatically overnight as Mr Trump's lead became clear, although the Dow Jones index is now expected to lose 2% – about 400 points when it reopens – compared to earlier predictions of a 4% fall.

Asian markets were described as a "sea of red" at one point, before seeing their losses narrow towards the end of Wednesday trading.

Kathleen Brooks, an analyst at City Index, said markets were calming down after the initial shock. "This suggests that a win for President Trump is not yet America's Brexit moment. US Treasuries have reversed earlier gains, and yields are rising."

The biggest winners on the FTSE 100 were pharmaceutical firms, defence and mining companies, while banks and retailers were among the losers.

"What you're seeing is healthcare companies which had been threatened by some of Hillary Clinton's policies actually recovering quite strongly," Ben Ritchie, senior fund manager at Aberdeen Asset Management, told the BBC.

"Companies like Astra Zeneca, GlaxoSmithKline are very big parts of the FTSE," he added.

The pound has strengthened against the dollar, rising 0.6% to go back above $1.24, while the euro is also 0.6% higher against the US currency.

Japan's yen, viewed as a safe haven currency in situations of international volatility, strengthened by 2% against the dollar. 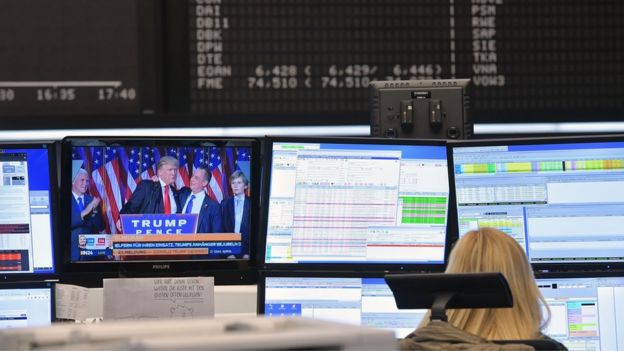 US investor Jim Rogers – who bet against the US stock market, believing Donald Trump would win – said US assets were taking a hit because of concerns about Mr Trump's foreign policy.

"Just about everything will go down," he told the BBC's Today programme. "It's going to rattle people because he talks about trade wars."

Meanwhile, concerns about the impact of a Trump presidency on the Mexican economy saw its currency, the peso, fall more than 13% overnight against the dollar to its lowest level in two decades.

Mexico is expected to suffer if Mr Trump is elected, because of his pledges to build a wall along the US border with the country and renegotiate the two nations' trade agreement.