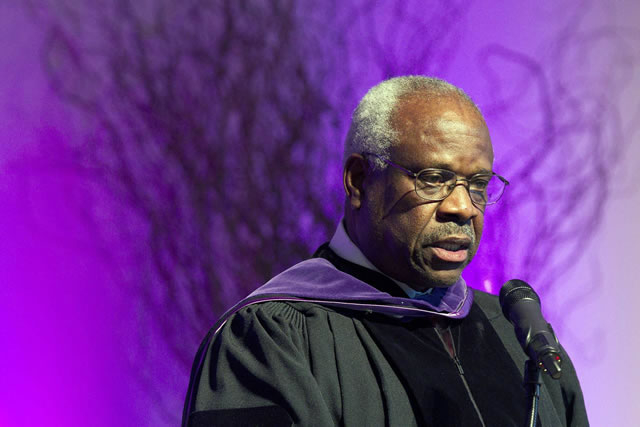 Justice Thomas’s questions, which voiced concern about protecting gun ownership rights, underscored yet another way the court has changed suddenly since the Feb. 13 death of Justice Antonin Scalia. Justice Scalia was a leading figure during oral arguments, often dominating the questioning of lawyers from the bench.

His absence leaves considerable time for other justices seeking to ask questions, especially those from a conservative point of view.

Justice Thomas, a Justice Scalia ally, previously has offered explanations for not asking questions. He generally has said it is a matter of being respectful to the lawyers, who get interrupted regularly and sometimes don’t get long stretches of time to present their arguments.

Monday’s case was about what kinds of misdemeanor crimes of domestic violence qualify as the type of offenses that can bar a convicted offender from possessing a gun. The case examined whether reckless behavior was enough to deprive one of the Second Amendment right to own a firearm—or whether instead the conduct had to be intentionally violent.

“If there are no further questions,” Ms. Eisenstein said, indicating she was preparing to end her presentation.

“Ms. Eisenstein, one question,” Justice Thomas said, jumping in with what turned into a long line of questions about the propriety of a misdemeanor violation stripping someone permanently of his or her constitutional right to firearm ownership.

“Can you give me another area where a misdemeanor violation suspends a constitutional right?” he asked, according to a transcript released by the court.

“You’re saying that recklessness is sufficient to trigger a misdemeanor violation of domestic conduct that results in a lifetime ban on possession of a gun, which, at least as of now, is still a constitutional right,” the justice said to Ms. Eisenstein.

He went on to note that neither of the defendants had used a weapon against a family member. “Again, the suspension is not directly related to the use of the weapon,” he said.

Ms. Eisenstein said the defendants “have each been convicted multiple times of domestic violence offenses and possess the firearms in close proximity. So these aren’t individuals who had long-ago convictions and are suffering from that ban.”

Justice Thomas has previously signaled he favors robust gun rights. In December, he and Justice Scalia dissented from the court’s denial of legal challenges to a Chicago-area ordinance banning semiautomatic weapons and large-capacity magazines.

Justice Thomas was part of the 5-4 conservative majority in District of Columbia v. Heller, the landmark 2008 ruling that struck down a city handgun ban and found the Second Amendment confers the right of individuals to own firearms for self-defense.

Despite his longtime silence during oral arguments, Justice Thomas does speak in the courtroom when the justices announce new opinions. When he is the author of the court’s decision, he recites a summary of the court’s judgment from the bench.

Courtroom microphones did pick up the justice speaking briefly during a January 2013 argument, but it was a joking aside to colleagues about a reference to his alma mater, Yale Law School, and wasn’t intended for the audience.