Two US journalists have been shot dead during a live TV report in the state of Virginia, their employer has confirmed.

During the live broadcast, shots and the reporter's screams could be heard, and the camera fell to the ground.

Police say they are investigating the incident and still searching for the suspect.

An unconfirmed report says he is being chased north on the Interstate 81 highway.

Virginia Governor Terry McAuliffe said: "We believe it was a disgruntled employee who fired at the TV crew. Not a case of terrorism. It is a criminal case."

Ms Parker was starting an interview about tourism at the shopping centre when suddenly eight shots rang out, the camera spun and dropped to the ground, and her screams could be heard.

The footage captures what appears to be a fleeting image of the gunman, who is wearing black trousers and a blue top – and holding a handgun.

The station said the woman who was being interviewed had survived the attack.

"Alison and Adam died this morning at 06:45 shortly after the shots rang out. We do not know the motive or who the suspect or the killer is," the station's general manager, Jeffrey Marks, announced on air.

"I cannot tell you how much they were loved by the WDBJ7 team… our hearts are broken," he said.

WDBJ7 anchor Chris Hurst revealed that he and Ms Parker had been in a relationship and had planned to marry. 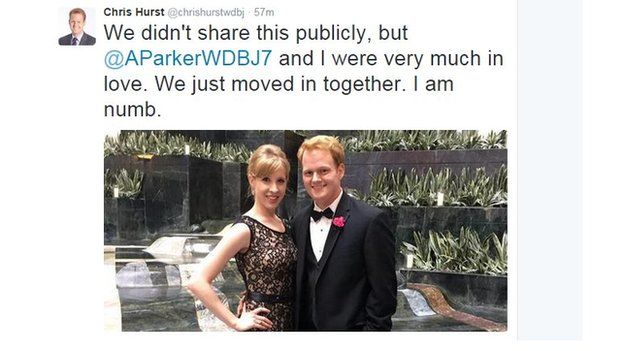 "We didn't share this publicly, but @AParkerWDBJ7 and I were very much in love. We just moved in together. I am numb," he said on Twitter.

"We were together almost nine months. It was the best nine months of our lives. We wanted to get married. We just celebrated her 24th birthday.

"She was the most radiant woman I ever met. And for some reason she loved me back. She loved her family, her parents and her brother."

He added that Ms Parker had worked on a regular basis with Mr Ward, and that he was heartbroken for his fiancee, a producer at the station.