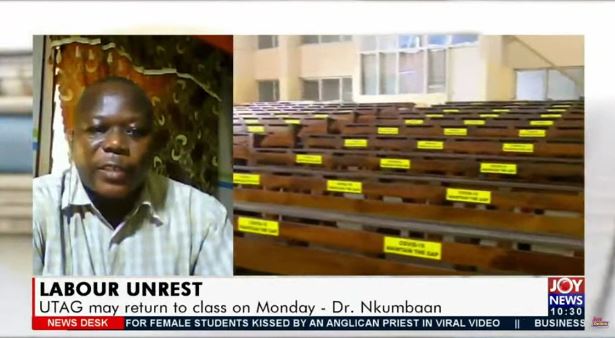 The National Executive Committee of the University Teachers Association of Ghana (UTAG) will hold an emergency meeting on Thursday to decide a possible suspension of its industrial action.

The meeting, which is expected to be held at 4 pm, follows the withdrawal of the National Labour Commission’s court case in the early hours of Thursday after a Memorandum of Understanding (MoU) signed between both parties on Wednesday.

In that memorandum of agreement sighted by JoyNews, UTAG agreed to take steps to suspend the ongoing strike action whilst the Ministry of Employment and Labour Relations, in conjunction with the National Labour Commission (NLC), take steps to discontinue all legal processes against the association.

The university lecturers are putting measures in place to halt the industrial action as they prepare to fashion out a roadmap with government in dealing with their concerns.

President of the University of Ghana Chapter of UTAG, Dr Samuel Nkumban, indicated In an interaction with JoyNews that resolutions from the meeting would be officially communicated to the general public.

He, however, cautioned students to disregard a statement in circulation that is supposedly coming from UTAG as he describes it as fake.

Earlier, the National Labour Commission had secured an injunction against the Association, arguing that the law forbids UTAG from proceeding with the industrial action when negotiations are underway.

Subsequently, the Labour Court of the High Court slapped UTAG with a fine of ¢3,000 for wasting its time due to its inability to complete processes when the Court convened to hear the injunction case brought before the Association by the National Labour Commission (NLC) on the strike action.