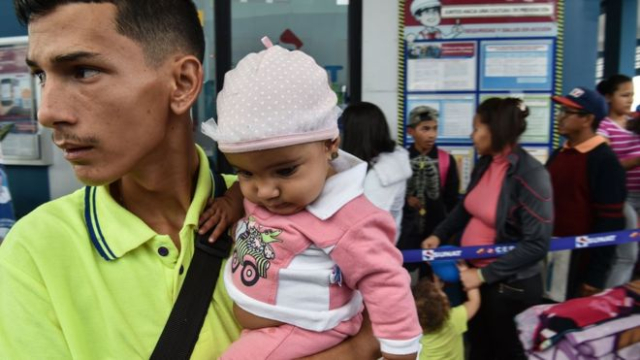 The UN's migration agency says Venezuela is heading for the same refugee "crisis moment" seen in the Mediterranean in 2015.

The warning comes as its neighbours try to halt the movement of people fleeing Venezuela's economic crisis.

Peru brings in stricter border regulations on Saturday – a day after a court overturned Ecuador's attempt to strengthen its own controls.

More than two million Venezuelans have fled their country since 2014.

They are fleeing a dire economic situation, with Venezuelans facing shortages of food, medicine and basic goods.

Dash to the Peruvian border

Hundreds of Venezuelans were bussed through Ecuador to the Peruvian border before the midnight deadline on Friday.

Jonathan Zambrano, 18, who is at Tumbes on the border between Ecuador and Peru, told news agency AFP he had been on the road for five days along with many others.

More than 2,500 crossed into the small Peruvian border town of Aguas Verdes on Friday, with thousands more trying to reach Peru at the main crossing point at Tumbes.

The new rules coming into force on Saturday require them to have valid passports. Until now, Venezuelans have been allowed to enter Peru with just their ID cards.

The state of Roraima, in Brazil's Amazon region, also had its attempt to close the border thrown out by a judge earlier this month.

A hardening attitude towards Venezuelans seeking a new life could also be heard on the streets in Peru.

Giannella Jaramillo, who runs a clothes stall in a town near the border, told AFP: "On the one hand we're sorry for the Venezuelan people, but they are taking a job away from a Peruvian. It's hard to help more people." 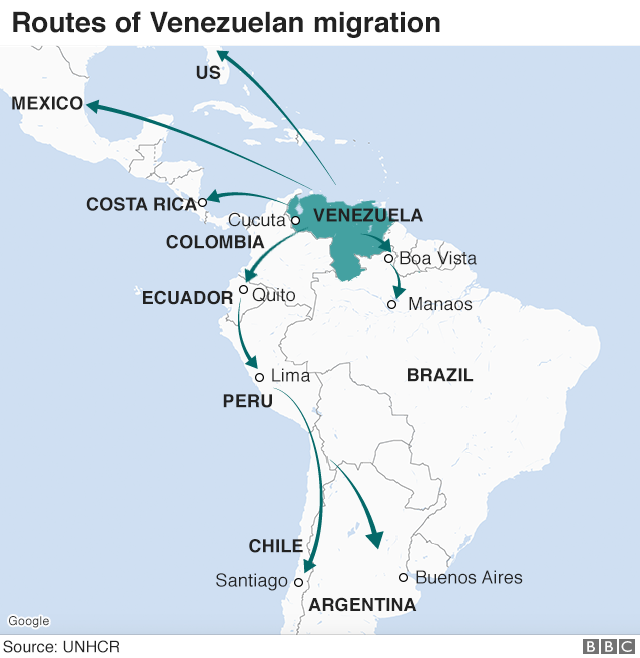 Her words were echoed by Ecuadoran Gerardo Gutierrez.

"In economically poor countries, it's hard to help more people with what little there is."

Peruvian Prime Minister César Villanueva has said requiring Venezuelans to show their passport at the border did not mean that Peru was "closing the door" on Venezuelan migrants.

He said ID cards did not provide enough information and could easily be forged.

Peruvian Foreign Minister Néstor Popolizio said Venezuelans could apply for visas in Peruvian consulates in Venezuela, Colombia, Ecuador or even at the border crossing in Tumbes.

Situation 'building to a crisis'

Joel Millman, a spokesman for the International Organization for Migration (IOM), said that all this – as well as recent violence at the border in Brazil – was an early warning sign that the region was in need of help.

"This is building to a crisis moment that we've seen in other parts of the world, particularly in the Mediterranean," he told reporters.

"A difficult situation can become a crisis situation very quickly and we have to be prepared," he added.

However, Chiara Cardoletti of the UN's refugee agency (UNHCR), said other countries in the region had welcomed Venezuelans and were helping to "avoid a situation like the one we have seen in Europe".

"What we are seeing is a continent that has opened its doors to people who are fleeing and who need support," she said.

UN Secretary-General Antonio Guterres is to set up a special UN team to co-ordinate a regional response to the crisis, while Ecuador is to host a 13-nation regional summit in September.