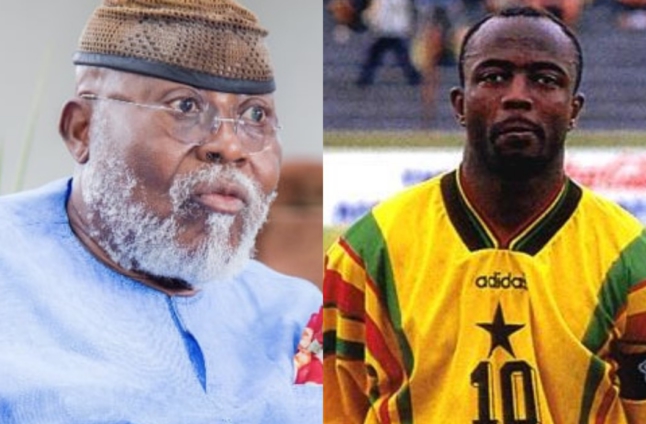 Amidst the euphoria surrounding the Black Stars participation in this year’s World Cup, a former president of the Ghana Football Association (GFA), Dr Nyaho- Nyaho Tamakloe, has recounted an ordeal the team went through forty years ago.

Casting his mind back to the finals of the Africa Cup of Nations (AFCON) in 1982, the veteran sports administrator said the Black Stars were humiliated on the pitch, when they beat host, Libya, in the finals.

According to him, the agitated Libyan supporters started throwing toilet rolls at the Black Stars, after the Stars defeated them in their own backyard.

In his narration, he said what infuriated the Libyan supporters was the fact that, the Libyan government generously transported the financially handicapped Black Stars to Libya to participate in the tournament; only to be defeated by the very folks they helped.

The renowned statesman recounted this incident while making a case for stakeholders to invest more money into the Black Stars in order to enhance their fortunes at all levels.

He said since time immemorial, the lack of money has been one of the major hurdles of the team, and hence the need for more financial investment into the senior national team.

“We didn’t have money for an air ticket to Libya. You won’t believe it. There was no money . The Libyans sent a special plane to come and take Abedi Pele and others to Tripoli or to wherever they were. And we got to the finals with them”, he told host Benjamin Akakpo on the AM Show on Wednesday.

Dr Tamakloe continued: “They thought we might just leave it for them. But we defeated them. And you Know what they did? Just to spite us, they started throwing toilet rolls on the field, because by then there were no toilet rolls in Ghana.

“They were the same people who flew us back to Accra. So if you want to get good results in anything that you do, you must focus on it”.

Dr Tamakloe also added that, there is the need for the Black Stars to be given ample time ahead of tournaments for the team to jell better.

His comments come at a time when the Black Stars are preparing for this year’s mundial in Qatar, in a few days.

Ghana is in Group H and will be locking horns with Portugal, Uruguay and South Korea.

The team has featured in the competition on three previous occasions in 2006, 2010 and 2014 respectively.

Making their fourth entry into the competition, the Black Stars are looking forward to giving a good account of themselves as they meet other world powerhouses in football.

In a tweet by the singer, he said some deserving players did not make the final selection due to their inability to pay their way through.

In what he described as ‘Pay to Play’, the decorated musician questioned the Ghana Football Association about the monetary inducements, which he believes influenced the Black Stars’ final squad for Qatar.

“There are players who are supposed to be in the squad who are not here because of #PayToPlay @ghanafaofficial why?”, Stonebwoy queried.

The Ghana Football Association has however, urged all Ghanaians to throw their weight behind the team, as they prepare for their first round of matches in the group stages of the competition.

DISCLAIMER: The Views, Comments, Opinions, Contributions and Statements made by Readers and Contributors on this platform do not necessarily represent the views or policy of Multimedia Group Limited.
Tags:
Abedi Pele
Black Stars
Dr Nyaho-Nyaho Tamakloe
Qatar 2022 World Cup