“I don't like comedians on the show but I love you,” popular judge on reality show, Britain’s Got Talent, Simon Cowell, said on Saturday to Ghanaian comedian, Kojo Anim after his brilliant performance.

UK-based Ghanaian comedian has added to the few numbers of people who have impressed judge.

Kojo Anim who took the audience for an amazing ride with his jokes, was shocked to see the crowd applaud excitedly and Simon approve of his craft, enough to earn him a golden buzzer.

Simon Cowell who laughed throughout Kojo Anim’s performance applauded him for getting over his nervousness and delivering a good performance.

”I could see the audience reacting to you and you reacting to them,” Simon said then pressed the golden buzzer.

An overwhelmed Kojo fell to the floor crying obviously surprised at the reaction to his performance.

Simon Cowell went on to hug Kojo on the stage. 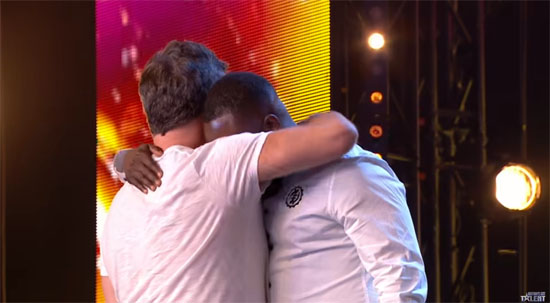 “I had to tell you, I don’t know what it is, you were so funny, so unpredictable. You just got the most amazing energy. This is the break you’ve been waiting for,” Simon Cowell said.

To get Simon out of his comfort zone with comedy is insane, Kojo said after he walked off stage.

Kojo Anim has been doing comedy for two decades.

He has worked with comedian Chris Rock, Dave Chapelle and opened for Kevin Hart.

The comedian is also the CEO of The Colour Network and has also worked as filmmaker, actor and screenwriter.

Some people believe his craft was not really funny. Others believe it was unfair for him to get the buzzer over other amazing acts that performed that night.

@arundell_john  tweeted, “Didn't laugh once, I'm a funny guy and admire comedy but sorry what was funny about this act. Golden buzzer it ain't that's for sure, certainly can't believe Simon did it considering how fussy he is. I'm stunned and in disbelief.”

Others have attributed Kojo getting a golden buzzer to him knowing one of the judges, Alesha Dixon.

Kojo Anim and Alesha Dixon know each other from Alesha’s Mis-Teeq days.

@Johnnyafc tweeted, “No it was cause he knew Alesha.”

Fans who enjoyed Kojo’s performance stood in to defend him.

@ImRenoCode replied @Johnnyafc saying, “You serious? That was natural and his jokes were lit! I'd have reached for the golden buzzer if I were the judge.”

@itsryebailey_  added, “Some people need to get. Sense of humour he was hilarious.”

The golden buzzer sent Kojo Anim straight through to the live semi-finals which give him the chance to either prove the people doubting him wrong or right.