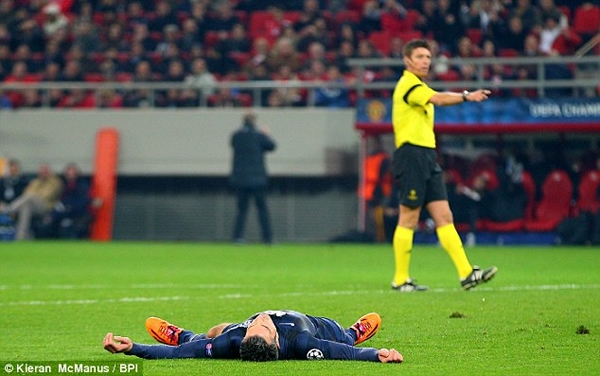 Manchester United's Champions League campaign is in serious peril after they were comfortably beaten by Olympiakos in the last-16 first leg in Athens.

United, who registered only one shot on target, fell behind when Alejandro Dominguez diverted home Giannis Maniatis's effort before the break.

Arsenal loanee Joel Campbell's precise shot doubled the lead and the visitors only came to life late on.

Robin van Persie blazed over the top when they finally opened up the Greeks.

Trouble at the top end 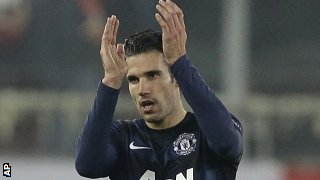 It would have been an injustice to the hosts had the Dutchman converted his late chance, however, after United's current limitations were exposed on a chastening night.

And, after reverses for Manchester City and Arsenal last week, the Greeks inflicted the third defeat of the round for English sides.

Olympiakos manager Michel had suggested before kick-off that United, whose best hope of passage into next year's Champions League appeared to be winning this season's competition, could fold under the pressure of knockout football.

The visitors, who were famously eliminated by Galatasaray in a white-hot atmosphere in Istanbul in 1993, certainly fuelled the noisy home fans' enthusiasm with some early defensive wobbles.

After Rio Ferdinand had misplaced a couple of passes, a last-ditch challenge from Nemanja Vidic only just ended Dominguez's run after he had advanced into the area unchallenged.

Dominguez continued to orchestrate Olympiakos's attacks from an advanced midfield role and with Juan Mata cup-tied, Adnan Januzaj left out of the match-day squad and Rooney frustrated by the referee and his own performance, the visitors lacked a similarly commanding figure. 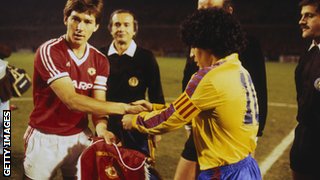 The last time that Manchester United overturned a two-goal deficit in Europe was when they beat Diego Maradona's Barcelona 3-0 at Old Trafford in March 1984 in the quarter-finals of the Cup Winners' Cup.

So it was fitting that it was the Argentine who opened the scoring.

Maniatis's trundling low shot posed little danger to United goalkeeper David De Gea, but Dominguez's outstretched foot cleverly diverted the ball into the opposite corner giving the Spaniard too much ground to make up.

United, who had lacked energy and invention, showed slightly more purpose before the break, but could not create any clear-cut chances, goalkeeper Roberto dealing competently with the visitors' crosses.

David Moyes's half-time team-talk needed to focus players' minds and change their tactics but neither was in evidence as Tom Cleverley knocked the ball out of play under no pressure soon after kick-off.

A goal down, the visitors had no room for further error and Campbell's superb curling effort, after he slipped Michael Carrick's flimsy challenge, threatened to cut them adrift in the tie.

Moyes introduced Shinji Kagawa and Danny Welbeck at the expense of Antonio Valencia and Cleverley, but it did little to change the momentum.

Michael Olaitan sent a shot fizzing just over as the hosts revelled in the space and uncertainty in United's defence.

Only in the final 10 minutes were United able to bring any pressure to bear, but, after two measured touches had given him a clear sight of goal, Van Persie crashed over the top with his weaker right foot from Chris Smalling's cross.

It summed up a miserable new episode in Moyes's faltering first season in charge.