We were promised a nuclear war between the candidates over allegations of sexual impropriety, and it didn't take long for it to blow up.

But unlike a real nuclear war, with its mutually assured destruction, the participants were left standing after the exchange and had to slug it out for another hour.

What resulted was a muddled mess, with both candidates gaining the upper hand on occasion and stumbling in other moments.

Given that Mr Trump's campaign has been in freefall over the past 48 hours, anything less than a total Jack-Nicholson-at-the-end-of-A-Few-Good-Men style meltdown onstage has to be deemed a marginal success on his part, and so it was.

The prospect that any significant portion of what is sure to be a massive television audience emerged from the evening with any change of opinion, however, is unlikely.

If Mr Trump's overarching goal was to offer a performance that would allow him to cobble together an electoral majority on election day, then his sometimes glowering, often aggressive performance will fall far short.

Team Clinton, on other hand, has to view this as an opportunity missed. Her supporters were hoping for a political kill shot that would push Mr Trump's remaining supporters toward the exit and turn the last month of the campaign into a glorified mop-up operation.

While she landed some staggering blows, it was by no means a rout. Instead, both candidates will likely emerge bloodied but not beaten.

Mrs Clinton still has by far the easiest path to the White House, but she'll have to work for a few more weeks to earn it.

Here are some key moments from the debate, and how it played out for the two contenders. 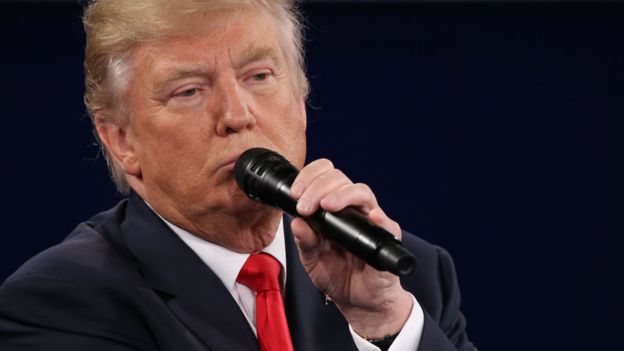 Mr Trump's candid, lurid discussion of his (often unwelcome) sexual exploits has dominated the US political world for the last two days, and they were front-and-centre from the beginning of the debate. After a few feints and some pressure from moderator Anderson Cooper, the American public got the exchange they were all expecting and, quite likely, tuning in to see.

It began with Mr Trump asserting that "nobody has more respect for women than I do" – a response that had the reporters in the media work room snickering. Then Mrs Clinton took her shot.

"I think it's clear to anyone who heard [the tape] that it represents exactly who he is," she said. "Because we've seen this throughout the campaign."

And from there, the gloves came off. After dismissing his recording as "locker room talk" for which he was sorry, Mr Trump unloaded every bit of malicious allegation and rumour he had.

He ended it all by saying that as president he would order a federal investigation into Mrs Clinton that would end up with her imprisonment.

It was easily the most tawdry exchange in 56 years of televised presidential debates – one that will likely cast a shadow over US politics for years to come.

Mrs Clinton may have emerged the beneficiary, but the nation was the worse for it. 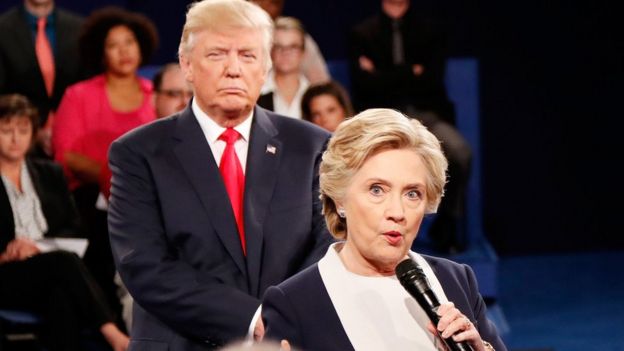 Mrs Clinton probably would have been satisfied if the debate had ended with that exchange, but that was just the beginning. The next few rounds would put her on her heels and prove that Mr Trump had learned a few lessons from his prior debate shortcomings.

Mrs Clinton was forced, once again, to explain her use of a private email server as secretary of state and, unlike the first debate, after saying she regretted the decision she quickly became mired in a more detailed explanation. Mr Trump then carved up her team's unsupervised deletion of emails on the server that they deemed not work-related.

"If you did that in the private sector, you'd be put in jail, let alone after getting a subpoena from the United States Congress," he said.

Mr Trump also went on the attack when Mrs Clinton was forced to respond to excerpts of her Wall Street speeches that were acquired by hackers possibly tied to the Russian government and released by Wikileaks.

Mrs Clinton – quite remarkably – didn't deny that the documents were authentic.

Instead, she opted to explain her comments about having different public and private policy positions by saying it was a reference to a film about Abraham Lincoln.

Time and time again, Mr Trump hammered Mrs Clinton on the trust issue – which polls show is one of her greatest weaknesses. He repeatedly cited her primary opponent, Bernie Sanders, who said she showed a lack of judgement.

Unlike the previous debate, he showed something akin to message discipline and left Mrs Clinton staggered. 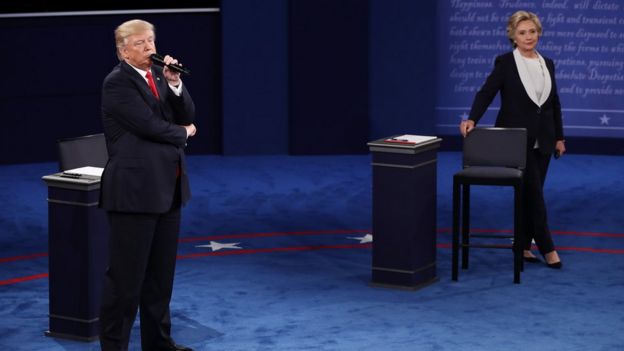 Part of the reason the middle portion of the debate was at times so challenging for Mrs Clinton was it often hinged on process questions – conflicts between the candidates and questions about their character. When the debate focused on policy, the gaps in Mr Trump's knowledge were readily apparent.

During a question about healthcare reform, Mrs Clinton spoke of her desire to reform and repair the law (a pipe dream if Congress stays controlled by Republicans, of course).

Mr Trump offered a word salad consisting of calls to repeal what he termed a disastrous law and replace it with "plans that are so good, because we're going to have so much competition" and talk of breaking lines.

He offered no details about how he'd ensure that pre-existing conditions could be covered without insurance mandates.

His discussion of tax policy boiled down to an assurance he'd cut rates "big league" and that Mrs Clinton would raise them.

When it came to US military policy in Syria, he ended up in a heated back-and-forth with debate co-moderator Martha Raddatz, saying he'd launch surprise attacks and asserting that Aleppo was already a lost cause.

He even made the rather astounding statement that he hadn't spoken with Mike Pence – who has a different view about the use of US military force against Syrian government targets – and that he disagreed with his running mate.

People may disagree with Mrs Clinton's answers on issues of foreign policy, taxes and healthcare reform, but at minimum they were coherent. 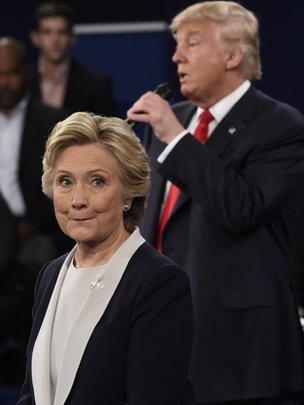 Another telling exchange during the debate was when Mr Trump was asked by an audience member to address the issue of Islamophobia.

The Republican candidate said it was "a shame", and then turned the answer into a discussion of the responsibility of American Muslims to report "when they see something going on".

He again repeated the unfounded allegation that neighours saw the San Bernardino attackers building bombs in their house but did not inform law enforcement.

When pressed by Raddatz on his proposed Muslim ban – which still is detailed on his campaign website – Mr Trump said it had "morphed into an extreme vetting".

He went on to detail a greatest hits rendition of his immigration policy. Syrian refugees could be a "Trojan horse". Illegal drugs are "pouring" over the US border with Mexico. Many undocumented migrants are criminals.

Mrs Clinton defended her call to increase the number of refugees admitted into the US and hit Mr Trump on his since-recanted Muslim ban.

"Donald has said, we're going to ban people based on a religion," she said. "How do you do that? We are a country founded on religious freedom and liberty."

Given that Mr Trump's proposal, while popular among Republican primary voters, is disfavoured by a majority of Americans, she wasn't going to let him off the hook easily.

As it happened: How the debate unfolded 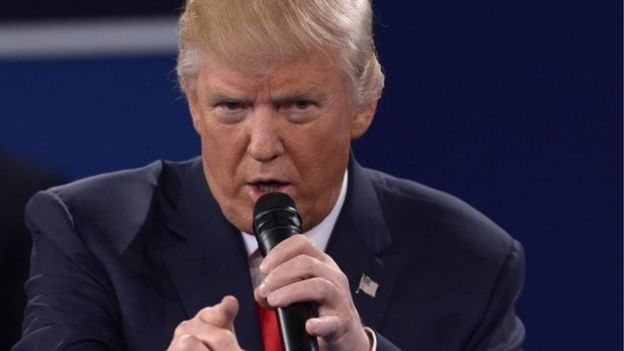 Given everything that transpired over the 90 minutes, how the debate looked – including the style and demeanour of the participants – seems somewhat insignificant. On the other hand, it contributes to the lasting impression viewers take away from the proceedings.

Mr Trump's sniffling returned. His penchant for interrupting, while more restrained than the first debate, reared its head on repeated occasions.

Mrs Clinton followed more traditional town-hall rulebook of addressing the questioner and then retreating from view when her turn ended. Mr Trump, on the other hand, often lurked behind his opponent – visibly glowering at times when she spoke, swivelling back and forth or pacing at others.

In many ways, the "hall" in this town hall consisted of two candidates, two moderators and a room full of spectators. The audience – which often takes centre stage in this format – seemed almost like an afterthought.

They had a few chances to ask questions, but the real fireworks came at Raddatz and Cooper's instigation.

Mr Trump was more than willing to pick fights with those two, repeatedly complaining about not being given enough time and grousing at one point that it was "three against one".

While complaining about the media likely will win Mr Trump praise from his conservative base, it's seldom a winning manoeuvre.

Finally, let's welcome to the debate stage a discussion of the current Supreme Court vacancy – the filling of which, in all honesty, could be the next president's lasting legacy.

And there was even a brief mention of the environment and climate change, although it was couched in terms of energy policy.

Don't hold your breath to hear the candidates pressed on either of those topics again anytime soon – not when "locker room" banter, Russian hackers and decades-old tax returns are still hanging in the air.