Virus to stay 'at least until next summer' - France's Macron - MyJoyOnline.com

Virus to stay ‘at least until next summer’ – France’s Macron 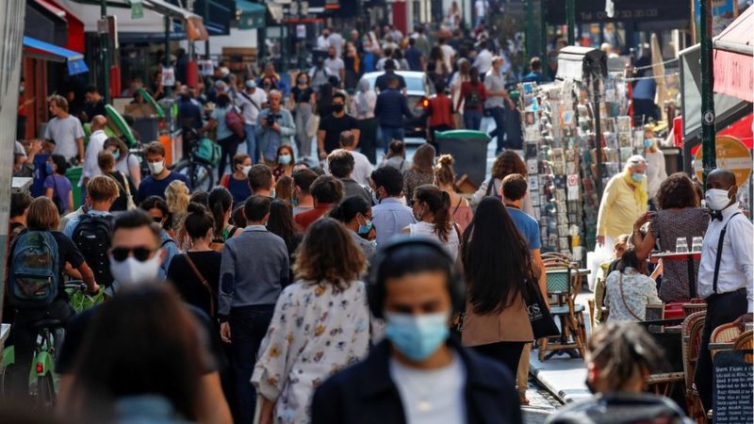 Many infectious people are in the streets without knowing it, a French hospital boss has warned

French President Emmanuel Macron says his country will be fighting the virus until at least the middle of next year as cases there surged past a million.

The World Health Organization said the spike in European cases was a critical moment in the fight against the virus.

It called for quick action to prevent health services being overwhelmed.

Daily infections in Europe have more than doubled in the past 10 days. The continent has now seen a total of 7.8m cases and about 247,000 deaths.

“The next few months are going to be very tough and some countries are on a dangerous track,” WHO chief Tedros Adhanom Ghebreyesus told reporters.

Globally there have been more than 42m cases and 1.1m deaths.

Scientists have warned that although progress is being made at unprecedented speed to create a vaccine, it would not return life to normal in spring. A vaccine could take up to a year to roll out, they have suggested.

What is happening in France?

Speaking on a visit to a hospital in the Paris region, Mr Macron said scientists were telling him that they believed the virus would be present “at best until next summer”, he said.

But he said it was still too early to say whether France would go into a new full or partial lockdown.

An overnight curfew in the country is being extended to about two-thirds of the country – 46 million people – from Friday night for six weeks.

The curfew could be relaxed when new infections dropped back down to between 3,000 and 5,000 a day, Mr Macron said – a level of infection that was last seen at the end of August.

Meanwhile the head of a Paris hospital group warned that the second wave of infections could be worse than the first.

“There has been a perception in recent months that a second wave does not exist, or that it is a small wave. The situation is the opposite,” Martin Hirsch, the head of the AP-HP hospital group, told local media.

Many of those currently in intensive care in his hospitals were older people who had been self-isolating but had become infected when their children visited them, Mr Hirsch said.

“There are many positive people, infectious, in the streets without knowing it and without anyone else knowing it,” he added.

And Prime Minister Jean Castex said a further influx of patients was likely – “The new cases of today are the hospitalised patients of tomorrow. The month of November will be difficult,” he said.