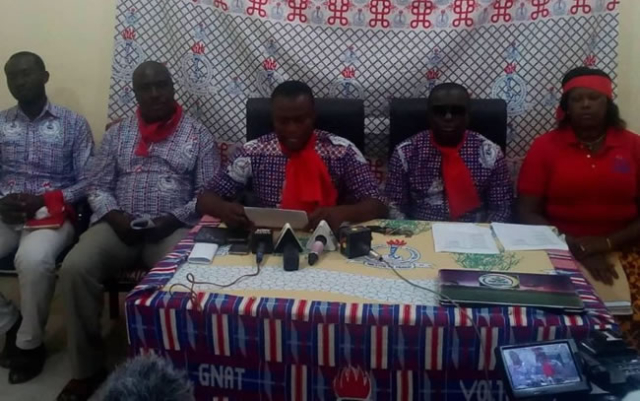 The Volta Regional branch of the Ghana National Association of Teachers (GNAT) would embark on a strike if the Ghana Education Service (GES) and the State Insurance Company (SIC) fail to stop the “illegal deduction” from members’ salary by the of August.

Mr Ayuba Aguda, Volta Regional Vice Chairman, GNAT, at a press conference in Ho said the Association was disappointed and frustrated by the decision of GES and SIC to impose insurance policy on its members and deducting premiums without members ‘consent and asked the two institutions to refund the money in time.

“We wish to state without any equivocation that by the end of August, 2019, if there is no indication of stoppage and refund of monies deducted, we the leadership of GNAT Volta, can no longer restrain our members in any way. The Ghana Education Service and their ally, the State Insurance Company are to be blamed for any industrial unrest,” he stated.

Mr Aguda said GNAT considered the action of GES and SIC as disrespectful to teachers and “clear display of arrogance” towards them because the Labour Act 2003, Act 651, which stipulated that the consent of teachers were to be sought before any deduction, was blatantly ignored.

He said the Association on several occasions engaged the Director-General of the GES and had also written series of letters to the authorities and stakeholders concerned to stop the imposition and the deduction but “all had met deaf ear and yielded no positive fruit.”

Mr Aguda also said the position of members not to fill any exit form was non- negotiable and that all refund should be made through the Controller and Accountant General’s Department because members did not fill any form, neither received or read any GES and SIC policy document.

He said most members, who filled the form did not receive their monies and those who received it also suffered deductions against their right of choice.

“We see this directive as a deceit and gross disrespect…We have not filled any form, neither did we receive or read any GES/SIC policy document. Why then should we fill exit form?” the Regional Vice Chairman asked

Mr Aguda said the establishment of an insurance policy for teachers was a campaign promise of the New Patriotic Party (NPP) during the 2016 general elections of, “which the teacher was not made to pay any premium contribution.”