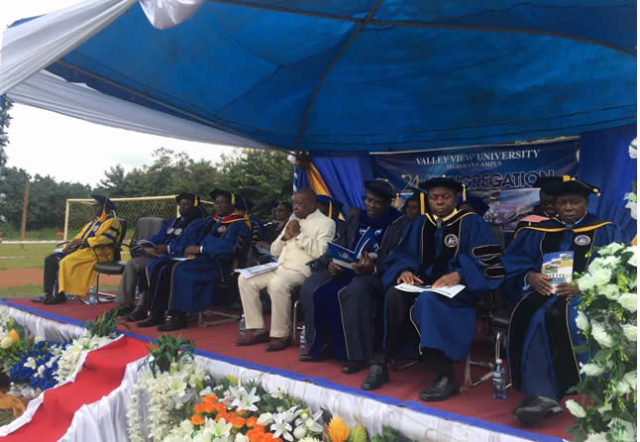 A total of 2,155 graduands from eight countries who pursued various post-graduate and diploma programmes at the Techiman campus of the Valley View University graduated at the 24th congregation of the school.

Addressing the congregation, the Vice-Chancellor, Professor Daniel K. Bediako urged graduands to prove to the world that Valley View university has given them something more important and valuable than a mere certificate. He called on them not to expect a better world but help in the creation of one.

"Given the opportunity, most of us would steal and misuse the resources of this country. When fathers and mothers are corrupt, children can only follow. There's therefore the need for a change," he added.

Professor Bediako appealed to government to instruct the Ghana Education Service "to focus on character building instead of exam preparation. How many exams haven't we passed?". He quizzed.

"I will even call that we close down what we call the West African Examination Council, it is a colonial baby which has outlived its utility. We must set up a better system to regulate entrance into tertiary institutions in Ghana".

He noted that whilst some tertiary institutions focus on academic training, the Valley View University focuses on whole person development.

On his part, guest speaker, minister of health and MP for Dormaa west Kwaku Agyeman-Manu lauded Valley View University's efforts to introduce a BSc nursing program and the building of a 50-bed capacity hospital on its Techiman campus.

He emphasized that as the school is preparing to upgrade its health facility into a Teaching hospital in the future, the government is committed to providing the school with the needed support to make this dream a reality.

Mr. Agyeman-Manu congratulated the university on its application for accreditation to run mental health programs adding that "this is an area we need more young men to specialize in".

He further encouraged the school to deepen its research work to support commercial Agriculture urging students to consider investing in agriculture if they thought of becoming entrepreneurs.