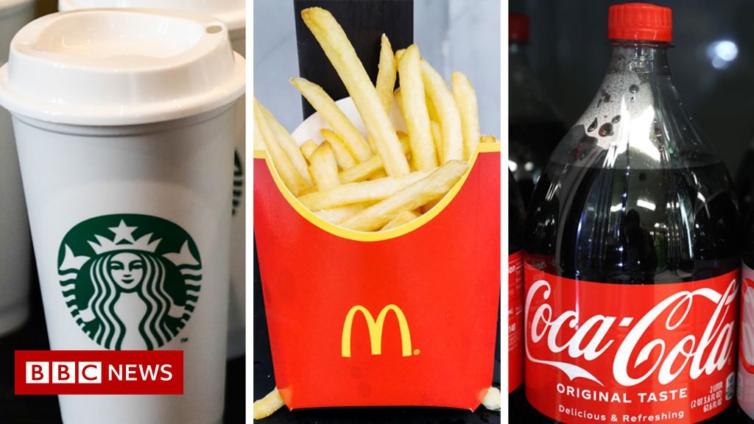 Consumer giants including McDonald’s, Coca-Cola and Starbucks have joined the list of firms halting business in Russia due to the invasion in Ukraine.

McDonald’s said it was temporarily closing its roughly 850 restaurants in Russia, while Starbucks also said its 100 coffee shops would shut.

McDonald’s said there was “needless human suffering unfolding in Ukraine”, and Coca-Cola called the war “tragic”.

All three firms said they would continue to pay their staff.

McDonald’s chief executive Chris Kempczinski said in a memo to staff: “The conflict in Ukraine and the humanitarian crisis in Europe has caused unspeakable suffering to innocent people.” The company said it was “impossible to predict” when it would reopen.

“As a system, we join the world in condemning aggression and violence and praying for peace.”

Companies have been under pressure to act as Russian violence against civilians has escalated.

#BoycottMcDonalds and #BoycottCocaCola had been trending on Twitter on Monday and over the weekend respectively.

Dozens of well-known firms including Netflix and Levi’s have already suspended sales or stopped providing services in Russia amid severe sanctions imposed by Western allies.

McDonald’s established its presence in Moscow in 1990, as the Soviet Union was opening its economy, drawing thousands for its burgers and fries.

As tensions with the West increased in 2014 over Russia’s annexation of Crimea, some of its restaurants were shut as part of an investigation into food standards, which many saw as politically motivated.

The closure now likewise carries symbolic weight, and is likely to influence other firms.

In 1990 I was in the queue when McDonald’s opened its 1st restaurant in Moscow: when iron curtains were crumbling & Russia was embracing the West. Today McDonald’s announced it is temporarily closing its 850 restaurants in Russia. Hugely symbolic.

McDonald’s has also temporarily closed its 108 restaurants in Ukraine, where it also continues to pay salaries. The restaurants in the two countries combined account for about 9% of the firm’s revenue and about 2% of global sales.

It has also temporarily closed its 108 restaurants in Ukraine, where it continues to pay salaries and has donated $5m to an employee assistance fund.

Mr Kempczinski said the firm had made the decision over the last week. In addition to staff, the move will affect hundreds of suppliers and the millions of customers McDonald’s serves in Russia each day.

The fast-food chain joins a growing list of western brands to cut ties with Russia over its attack on Ukraine.

Coca-Cola on Tuesday said it was suspending operations in Russia, which accounted for roughly 2% of the firm’s operating revenue and income. It also has a roughly 20% ownership stake in a bottling and distribution business in Russia.

“Our hearts are with the people who are enduring unconscionable effects from these tragic events in Ukraine,” the company said. “We will continue to monitor and assess the situation as circumstances evolve.”

Starbucks also announced it would stop all business activity in the country, including shipments of Starbucks products.

The coffee chain’s licensee in the country will temporarily shut more than 100 stores it operates there. The licensee, Kuwait-based Alshaya Group, will continue pay its roughly 2,000 employees, Starbucks said.

Starbucks said it would it would continue to “provide support to nearly 2,000 partners in Russia who depend on Starbucks for their livelihood”.

Other major global brands joining the backlash on Tuesday included the world’s largest music company, Universal Music Group, which said it was suspending all operations in Russia and closing its offices there.

“We urge an end to the violence in Ukraine as soon as possible,” the firm said in a statement sent to the BBC.

Unilever, maker of Marmite, Dove beauty products and PG Tips among other brands, also said it had suspended trade with Russia and planned to halt its advertising and media spending and investments there.

It said it would continue to supply “everyday essential food and hygiene products” that are made in Russia.

L’Oreal, the world’s biggest cosmetics company, is also shutting its stores and concessions in Russia and suspending online sales.

However, some firms have defended plans to continue operating in Russia, including Uniqlo owner Fast Retailing, whose founder told Japan’s Nikkei newspaper that “clothing is a necessity of life”.

Pepsi, which has a much larger presence in Russia than rival Coca-Cola, said it was halting the production and sale of Pepsi and other global brands in Russia and suspending capital investments and advertising, citing “horrific events” in Ukraine.

But the company, which started operating in Russia during the Cold War and now employs 20,000 people there, said it would continue to offer other products.

“As a food and beverage company, now more than ever we must stay true to the humanitarian aspect of our business,” boss Ramon Laguarta said. “That means we have a responsibility to continue to offer our other products in Russia, including daily essentials such as milk and other dairy offerings, baby formula and baby food.”