We are good protectors of the public purse – Akufo-Addo 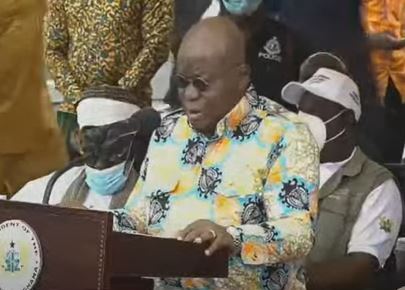 President Akufo-Addo has stated that the New Patriotic Party is a better manager of the public purse, unlike previous political parties that have assumed office.

He made the remarks at the commissioning of the four-tier Pokuase Interchange, Friday, July 9, 2021.

The construction of the Pokuase Interchange commenced in April 2018 and was initially expected to be completed in October 2020.

But due to the outbreak of the Covid-19 pandemic, which halted the progress of work on the project, the completion date was postponed.

That notwithstanding, government, in May 2021, gave an assurance that it will be completed in the first week of July 2021.

Speak at the commissioning of the interchange, the President noted that: “the completion of the project is an integral part of the comprehensive measures put in place by the government to address issues of congestion in urban centers and to help improve travel times on major arterial roads.”

He further entreated the Roads and Highway Ministry to ensure the proper maintenance of the road and urged users of the facility, “especially drivers, to adhere to the various road safety measures put in place for its safe use.”