We are investigating alleged impersonation of Adwoa Safo in Parliament - Ablakwa - MyJoyOnline.com

We are investigating alleged impersonation of Adwoa Safo in Parliament – Ablakwa 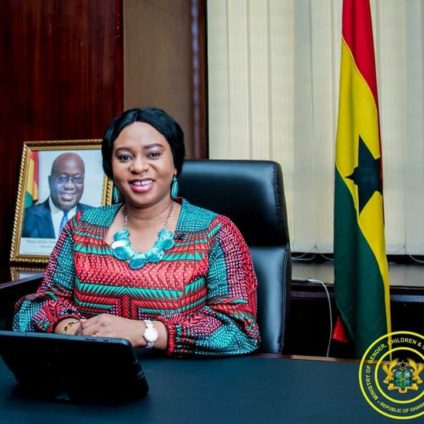 The North Tongu MP, Samuel Okudzeto Ablakwa, has disclosed that the Minority in Parliament is investigating a case of impersonation of Dome Kwabenya MP, Sarah Adwoa Safo, in Parliament on Tuesday.

On Wednesday, he told the host of Joy FM’s Super Morning Show that the Minority side suspects the lady the Majority side came in with was not the Dome Kwabenya MP.

Sarah Adwoa Safo, who doubles as the Gender Minister, was granted leave by the President upon her request.

The leave, which she sought for personal reasons, was supposed to have ended on August 31, 2021.

However, it was extended since she was unable to resume and requested an extension.

Sanitation Minister, Cecilia Abena Dapaah, has been acting in her stead as caretaker MP “until further notice.”

She has since not been seen in Parliament until the Minority alleged that someone said to be her was seen in the House to vote on the 2022 Budget Statement and Economic Policy.

The incident has been greeted with suspicion as a section of the public believes the lady who was seen in the House is not the MP. Instead, they suspect she is a relative of the MP who resembles her.

The Minority Caucus is also raising concerns over the incident, insisting that “she may not be Adwoa Safo.”

Based on this, the North Tongu MP, Okudzeto Ablakwa, has assured that the Minority will bring closure to the matter as investigations are ongoing.

“We’re taking a very serious view of that, and I’m sure that it will be the basis for some inquiry going forward,” he said.

“Seriously, and we are probing further, and I’m sure in subsequent hours we will make our decision clear on what we’ll like to do on that matter. So whoever that person is, we’ll get to the bottom,” he added.

Meanwhile, MP for Okaikwoi Central constituency, Patrick Yaw Boamah, who was also on the show dismissed the assertion.

According to him, his colleague Sarah Adwoa Safo was present in Parliament on Tuesday when the House approved the 2022 budget. He noted that the Dome Kwabenya MP was present during a Majority caucus meeting and also interacted with some legislators present.

“Adwoa was in the House. We even had a caucus meeting and she was there. Everybody had a chance to talk to her,” he told hosts Kojo Yankson and Winston Amoah on Wednesday.

The Okaikwoi Central MP, therefore, admonished the Minority side to engage the Majority Group and take decisions in the interest of the general public.

“They should come let us do business for the good people of this country. If you have an amendment to the E-levy, come let’s debate it. That is how we want to progress as a House and we should forget about what has happened and work for the good people of Ghana, and ensure that whatever they have asked to do, we do it in accordance with the wishes of the people.

We are a listening Parliament,” he added.