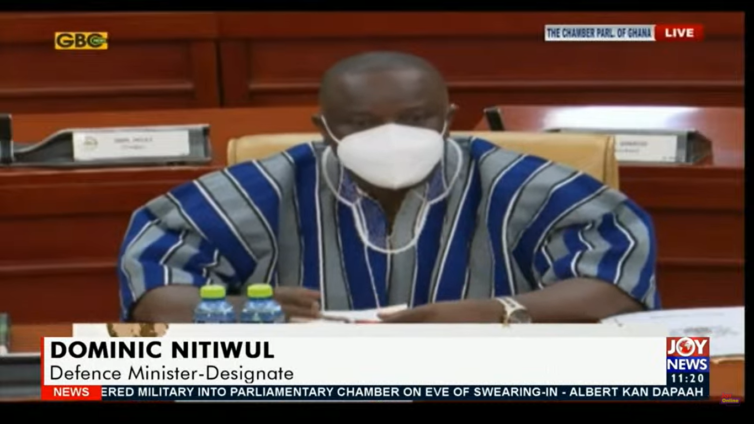 The Defence Minister-Designate, Dominic Nitiwul has expressed concerns about the lack of technological know-how in the security agencies especially the military.

According to him, there are several challenges facing the military ranging from accommodation, training and so on but a major one of concern is the lack of modernisation of weaponry and technology.

The Bimbilla MP told Parliament’s Appointment Committee during his vetting Thursday that he intends to upgrade the outfit to address and resolve when given the nod.

He added that the Ghana Armed Forces should be equipped technologically so it is up to standard with their military counterparts elsewehere in the world.

Mr Nitiwul said equipping them with modernised weaponry and technology will enable them to fight terrorism which has become sophisticated.

“We need to also modernise them in terms of weaponry and technology…so we leverage technology, for instance, to be able to fight terrorism.

“As stated by the National Security Minister-designate, you may not have a whole armoury coming to attack you, but you will have cybersecurity, you are going to have a terrorist who may use different things.

“They may use drones, they may use cyber to attack, so you have to modernise the armed forces and it is some of the things that we would continue to ensure it is done,” he said.

Citing other challenges faced by the Armed Forces, Mr Ntiwul said, “Training is another thing that is essentially necessary but more importantly, we need to give them the resources to be able to do that.

“Of course resources are limited but we need to find resources for our security services to enable them to protect us.”

Mr Nitiwul added, “A soldier who does not undertake training may even forget how to shoot the gun and in danger might not be able to do much for the nation.

“So you need to stimulate battle fields experience for your soldiers even when there is none and so the fire power demonstration that the soldiers go… is necessary,” he stressed.

DISCLAIMER: The Views, Comments, Opinions, Contributions and Statements made by Readers and Contributors on this platform do not necessarily represent the views or policy of Multimedia Group Limited.
Tags:
Appointments Committee
Bimbilla Constituency
Defence Minister-designate
Defence Ministry
Dominic Ntiwul