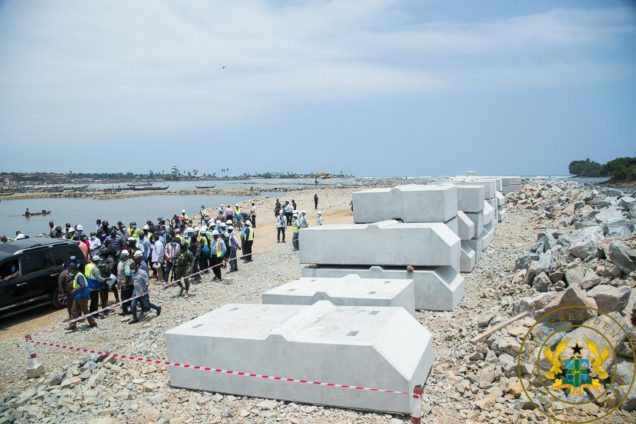 The Minister of Finance, Ken Ofori-Atta, has revealed that government will allocate at least GH₵10million to complete the feasibility engineering studies on the Blekusu Coastal Protection Project.

He made this known during a press briefing on Monday. According to the Minister, this allocation will see to it that the storm surge that renders many homeless in Keta, Ketu South and Anloga constituencies will be a thing of the past.

“We shall make the necessary budgetary allocation of at least GH₵10million to complete the feasibility engineering studies for the coastal communities adversely affected.”

Mr. Ofori-Atta also added that the incumbent government will “broaden the scope of the studies to consider a more comprehensive solution to protect Ghana’s 540km of coastline, including the 149km between Aflao and Prampram.”

According to the Minister of Works and Housing, Mr. Francis Asenso-Boakye, work has commenced on the second phase of the Blekusu Coastal Protection Project and it would entail the construction of 37 armour rock groynes, with land reclamation covering a minimum coastal stretch of 8,000 metres (8 kilometres) to protect beaches and communities against encroachment by the sea.

The Finance Minister’s disclosure comes as a response to several demands by the Minority Group in Parliament and residents in the Volta Region, for the completion of the second phase of the Blekusu Coastal Protection Project.

They want government to fast-track its completion due to the recent storm surge that displaced the over 3,000 residents of Abutiakope, Kedzikope and Keta Central in the Volta Region.

Since the unfortunate incident on Sunday, November 7, many had anticipated government to make mention of the sensitive matter in its 2022 Budget presented by the Finance Minister last month.

However, Mr. Ofori-Atta did not mention it in the fiscal policy for next year.

Owing to this, the Minority made known their decision to reject the Budget until their concerns are addressed.

As part of its conditions for the approval of the 2022 budget, the Minority has demanded that government withdraws the Agyapa deal, suspends the proposed 1.75% e-levy, reviews the benchmark value for imports as well as provide for the Keta tidal waves disaster.

Government’s decision to allocate at least GH₵10million to complete the feasibility engineering studies on the Blekusu Coastal Protection Project, is therefore in line with the call by the Minority Caucus.

The contention heightened on December 1, when chaos broke in the chamber after First Deputy Speaker, Joseph Osei-Owusu overruled a motion filed by Minority Leader, Haruna Iddrisu to rescind the approval of the budget.

In view of this, Parliament has set up a 20-member Committee to resolve the stalemate over the 2022 Budget.