We will be more effective if we get approval to open checkpoint at Damongo-Fufulso - GRA - MyJoyOnline.com 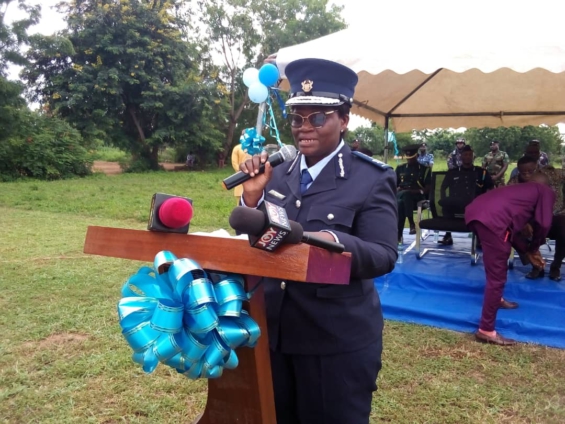 The Sector Commander of Damongo Collection of the Ghana Revenue Authority (GRA) – Customs Division in the Savannah Region, Assistant Commissioner Labujata Hamidu, says the Authority will be more efficient and effective if it is given the approval to open a collection checkpoint on the Damongo Fufulso Road towards the Accra Tamale road.

The Commander said the checkpoint will enable them to mop up smugglers from the Upper West and East Regions who avoid the Bole patrol base and rather use Damongo to Techiman in the Bono Region.

She said this during the inauguration of the Damongo Collection office in Damongo in the West Gonja Municipality of the Savannah Region.

The first floor of the building is the office complex while the second is a three bedroom for the sector Commander and her deputy.

Madam Labujata Hamidu insisted that despite the absence of a checkpoint for the Division and other logistical challenges, the Collection Department was able to arrest a good number of unaccustomed vehicles by going on snap operations.

“We hit the grounds running and as you can see we have a number of vehicles parked in our yard within five months. This confirms how we have worked.

“We achieved this by just going on snap operations and I believe we will be more efficient and effective if we get approval to open a checkpoint on the Damongo Fufulso Road towards the Accra – Tamale road”, she indicated.

She said, “this will enable us mop up smugglers from Upper West who avoid Bole base and rather pass through Damongo to Techiman and vis-à-vis Kumasi”.

According to Madam Labujata Hamidu, such vehicles also sometimes, dodge the Yapei checkpoint in the Central Gonja District from Upper East and North East Regions, “if they are able to beat Kulmasa’s checkpoint, they avoid Bole patrol base and rather patronage that of Damongo route to Kumasi.

“When these checkpoints are put in place due to the porous nature of our borders, it will go a long way to frustrate smugglers and increase revenue for the country”, Madam Hamidu stated.

On the impact of their activities in the West Gonja Municipality, Madam Labujata Hamidu said, “We are very much aware of how much our activities have impacted the lives of the people in Damongo and its environs and that’s causing a lot of discomfort especially for owners of unaccustomed vehicles and in particular, commercial vehicles.

“Unfortunately, the little amnesty granted to users of unaccustomed vehicles last year was not taken advantage of. So, all we require from such defaulters is to cooperate with us in compliance with the necessary revenue tax laws,” Madam Labujata Hamidu stated.

She also added that the Division will continue to play its roles as a responsible state agency and educate the public on their tax obligations as a matter of policy in order to promote harmonious co-existence.

On revenue mobilisation, she said despite all the logistical challenges including the non-inclusion of the Division on monthly leaves, training programs for officers and revenue targets, the Damongo Collection, requested for a revenue target and have already achieved that with the hope of exceeding it by the end of the year 2022.

Madam Hamidu also announced that, trips to Tamale or Wa in the Northern and Upper West Regions to collect parcels are over as the Division has stationed a Custom officer at the Damongo Post Offices to attend to such services.

Whilst commending management for their success stories, the Savannah Regional Minister, Saeed Muazu Jibril, reiterated his willingness to support the various Government agencies and departments in the Region to succeed and lift the name of the Region.

He said the creation of the Savannah Region by President Nana Addo Dankwa Akufo-Addo has come with several opportunities including the successful revenue service target achieved by the Division.

Mr. Saeed Jibril thereby added that, “let also assure of our support as a Regional Coordinating Council that what we are going to do is to ensure that all the challenges enumerated, you will over come them”.