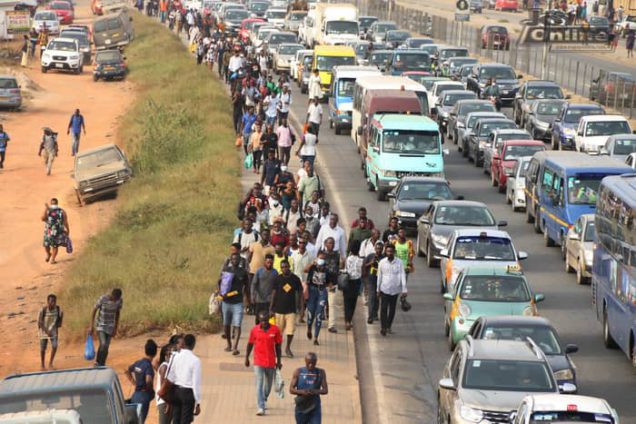 The Coalition of Commercial Transport Owners on Monday embarked on an indefinite strike action to protest high cost of fuel which affects their operations negatively.

They wanted government to scrap taxes like the Price Stabilisation and Recovery Levy, Special Petroleum Tax, the Energy Recovery Debt Levy and the Sanitation levy to reduce the economic hardship its members are facing due to surge in fuel prices.

This left many commuters who use their services to and from their various destinations stranded. Many who opted for ride-hailing services had to pay double of the normal fare due to high demand.

To mitigate the effect of the strike, the Police Service, under the leadership of the IGP, Dr. George Akuffo Dampare transported some of the commuters to their various destinations. The Police Service also gave the stranded commuters bottles of water to refresh themselves.

Later in the day, the strike was suspended due to consultation with the government.

Meanwhile, the Minority in Parliament have stated unequivocally that they will reject the 2022 Budget should government insist on implementing the 1.75% e-levy , despite some modifications made to the budget.

Finance Minister, Ken Ofori-Atta, while addressing the press on Monday noted that paragraphs 442 and 443 of the Budget statement, which relate to the ‘Agyapa’ Royalties Transaction, will be amended,  829 of the Budget will equally be amended to cater for concerns that have come up over the Aker Energy and AGM Petroleum by the GNPC.

According to him, the government will continue its engagement with the Minority in Parliament and other relevant stakeholders to achieve a consensus on the e-levy.

On Friday, the Minority demanded that the financial proposals in the 2022 Budget, including the e-levy, be laid before the House for consideration. This they said is to avoid any hasty approval.

Also, the fight against road carnages in the country has been a challenging one.

Information from Director-General of Motor Transport and Traffic Directorate (MTTD), Dr. Samuel Sasu-Mensah, reveals that 80% to 90% of road accidents that occur in the country are attributable to driver behaviour.

He noted that most drivers who ply the roads do not comply with laid-down traffic rules and regulations.

Per the statistics, 2,608 people have been killed in road traffic accidents between January and November this year. This exceeds the whole of last year’s data, which indicate that 2,500 lives perished. So far, 14,138 people are battling various degrees of injury.

Deaths due to pedestrian knockdown have reached 726 so far and the Ashanti Region continues to lead in road traffic fatalities.

So far, 534 people have been killed in that region with 3,438 people injured. This is followed by the Eastern Region where 427 lives have perished and 2,369 injured.

DISCLAIMER: The Views, Comments, Opinions, Contributions and Statements made by Readers and Contributors on this platform do not necessarily represent the views or policy of Multimedia Group Limited.
Tags:
Commercial drivers strike
E-Levy
Road accidents