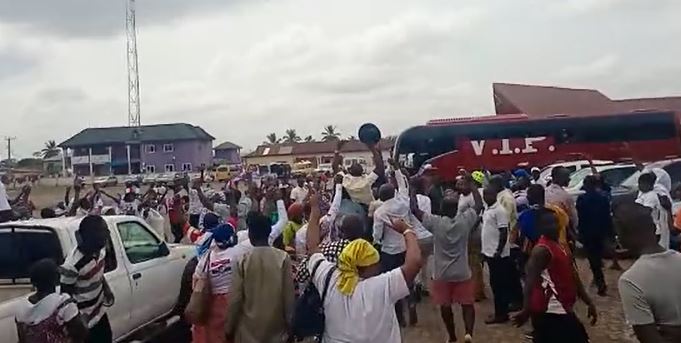 A Wenchi High Court has thrown out a petition against New Patriotic Party (NPP) legislator in the Techiman South 2020 election.

The petitioner was seeking the nullification of the poll which saw the NPP candidate, Martin Agyei Mensah Korsah, emerge victorious.

But at the hearing Wednesday, the court explained that the NDC 2020 Parliamentary candidate, Christopher Bayere, who was pursuing the matter, failed to prove the burden of petitioning.

The court was attended by some leaders of the NDC including General Secretary, Johnson Asiedu Nketia.

He was sighted leaving the court premises a few minutes before the judgement.

The NDC Parliamentary candidate insisted that the figures were not a true reflection of the election.

According to him, per the pink sheets of the NDC agents at each of the 267 polling stations, he garnered 50,306 votes in the Parliamentary election whilst the 1st Respondent polled 50,013 votes.

In August 2021, the Electoral Commission of Ghana was fined GH¢4,000 by the court after the Court refused to grant the EC’s request for a stay of proceedings in the dispute on July 30, 2021.

The EC’s application for a stay of proceedings was to enable it to file a motion to challenge the ruling of the Court at its previous sitting, when it granted the petitioner a motion to amend the title of the writ.

TCounsel for the EC, Emmanuel Addae said the stay of proceedings was to enable him to file supplementary statements in support of the application filed by the National Democratic Congress (NDC) candidate, Mr Christopher Beyere Baasongti.

However, reacting to the EC’s stay of proceedings, the Counsel for the petitioner, Justin Teriwajah argued that the motion was frivolous and unnecessarily geared towards delaying the adjudication of the case.

DISCLAIMER: The Views, Comments, Opinions, Contributions and Statements made by Readers and Contributors on this platform do not necessarily represent the views or policy of Multimedia Group Limited.
Tags:
Christopher Bayere Baasongti
NPP
Wenchi High Court