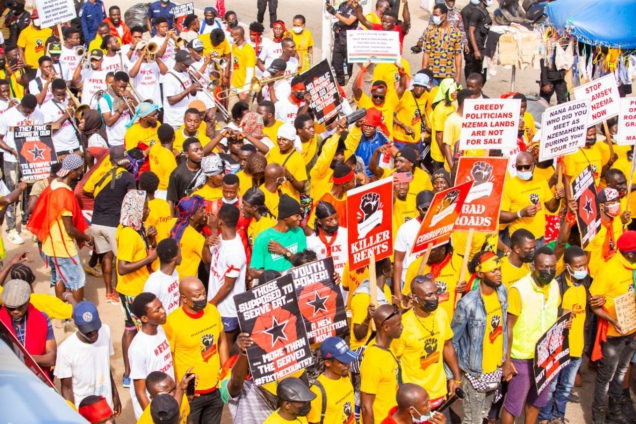 A #FixTheCountry protester in Sekondi in the Western says he and others joined the demonstration to drum home to present and past governments that Ghanaians deserve better.

“We want the leadership to know that we are tired of substandard governance and leadership, governments that have no plan and directionless leadership,” he told JoyNews’ Ina-Thalia Quansah.

He said in the last three decades, the youth have experienced nothing but governance that leaves more to be desired.

“We are telling them [political leadership] that we have had enough of the political pettiness such as National Democratic Congress (NDC) government not continuing the project of its predecessor New Patriotic Party (NPP) government and vice versa,” he said.

Lead by social media activists, the protest, which started on social media platforms like Twitter, Facebook, and WhatsApp, has been highlighting economic problems and government mismanagement.

After several back and forth with the Ghana Police Service, the activists and their supporters marched in Accra on August 4, against President Nana Akufo-Addo’s government.

Dressed in red and black and chanting patriotic songs, protesters waved placards declaring “corruption breeds poverty” and “fix our education system now” as they marched in the city centre.

“Nana Akufo-Addo, we’re suffering. Do something for us. Nothing is working,” were the words of one of the protesters in Accra.

“The government must wake up,” another demonstrator said.

The demonstration was the most recent anti-government protest since March when a top court dismissed the main opposition party’s challenge to Akufo-Addo’s re-election late last year.

One of the conveners of the campaign, Oliver Barker Vormawor, said after the Accra demonstration that they will take the drive to other regions including the Ashanti, Western, Volta and Northern.

The Western region protestors said they are asking for the same thing every Ghanaian wants: to fix the system.

“It cannot be that the region we exploit oil from does not have much in terms of infrastructure to boast of…when you walk around you see the level of hopelessness in the eyes of the youth. They do not have jobs and there is an issue of insecurity that we want to be fixed,” the protester said.