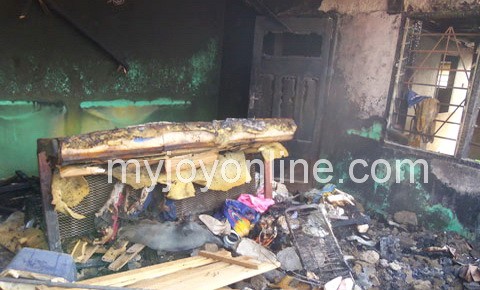 A widow and her three children have been rendered homeless after their house was ravaged by fire at Breman Nkontwima in Kumasi.

Thirty-one year old Sarah Alhassan and the kids now pass the night in the open at the mercy of the weather.

She lost her husband three years ago. Now the woman who sells porridge, locally known as ‘koko’ for a living, and to keep her children in school, has lost everything she had.

Sarah was away serving breakfast to her numerous customers when the fire started. Her kids were in school.

The family is compelled now to live without a roof over their heads.

Sarah could not hold back her tears as she recounted her ordeal to Nhyira News in during a visit to her make-shift abode.

Since the incident occurred, she and her three children have been sleeping under a mango tree.

Using two pieces of cloth she received as a donation, Sarah has erected a tent with the mango serving as stake.

Thanks, perhaps, to the severe harmattan, the family has had sleepless nights since Thursday.

Beyond shelter, Sarah appears passionate about her children’s education.

In what appears to be a hopeless situation, she told me, in tears that cannot be compromised.

Kumasi Metropolitan Co-ordinator, Vivian Akomea, says though NADMO has no immediate relief intervention, it will mobilize resources to support the family.

“Though we don’t have enough stock of relieve items, we will place her (the widow) in our priority list. Before then, we will immediately assess her situation and provide her with immediate relieves in the form of tent, mattresses, bucket etc”, she said