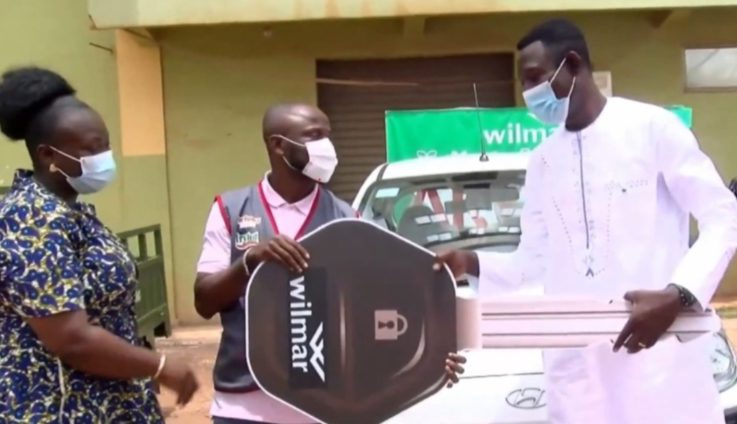 Wilmar Africa Limited, producers of Frytol & Fortune rice among others have honoured their promise by giving out cars, tricycles (Aboboyaa) and presents among other awards to winners in their annual “Akyedee Soronko” promotion.

the Head of Trade Marketing for the company, Patrick Sarpong elaborating on the need for the promo said they wanted to award customers who were doing well by patronizing more of their products in the Ashanti Region.

We promised them last year that whatever they will buy from us, we would make list and give them vouchers at Melcom but after 6 months those who did so well are still been rewarded.

According to the Head of Marketing for Wilmar Africa, Patience Mpere, this is the third year the company decided to reward customers who are profit-driven and poised to support the growing brand in Kumasi.

She explained that, in the previous years some of the winners won tickets to Dubai and Malaysia but due to the emergence of Covid-19 the event couldn’t come off as promised but customers were rewarded duly.

This is the third time we are doing this. The first time we sent them to Dubai and the next was Malaysia… we didn’t do it last year due to Covid-19 but even that we gave them money and other rewards, she explained.

In the interview with one of the winners, Mr John Amoako Manu, who won the ultimate prize of a car, he thanked Wilmar Africa for developing such an initiative.

Mr Manu told Adom TV that he and his team planned to win the ultimate prize at all cost since they believe in the cemented business of Wilmar Africa Limited.

We decided that no matter what we would win the award and through God’s grace we have won it. We focused solely on selling the Frytol oil. We would love to thank them for being able to bring such a business. Finally they have delivered, he said.

One of the key distributors who also formed part of the winners, Olivia Adu Nketia asked Wilmar Africa to continue with the initiative since it propels their profits and market share.

They should continue to do it because it will help them and their sales. Everyone wants their work to be profitable and this is a good thing, she added.

Wilmar Africa Limited is one of the leading fast-moving consumer goods companies (FMCG) committed to the processing, packaging, and distribution of a wide variety of consumer products and brands such as Frytol, Fortune, Viking, Alife, and Jamaa for local and international markets.