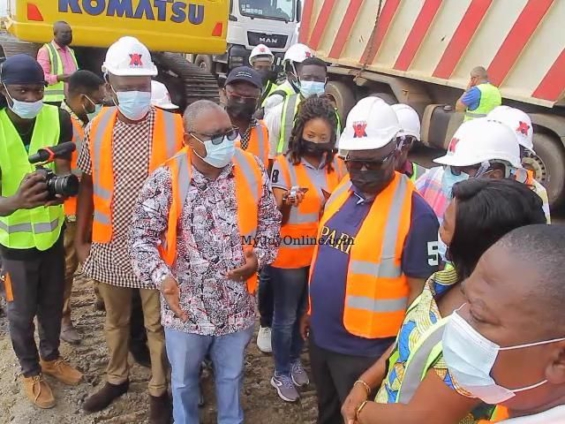 Engineers briefing the Minister about progress of work

The Ministry of Works and Housing has assured residents along the country’s coastline of the government’s readiness to address their concerns by completing the construction of the sea defence wall.

This follows the destructive effect the sea waves have had on the shorelines, which threatens the livelihoods of the residents, mainly fisherfolk and affects the country’s tourism potentials as well.

Sector Minister, Francis Asenso Boakye, who is touring the project sites in the Central and Western Regions has assured that all concerns of residents would be incorporated into the design of the project to guarantee a lasting solution to the problem.

“I believe that my visit here has helped. It has given me the opportunity to understand the teething challenge that the sea defence project is posing. I understand it’s causing flooding in this community because the lagoon is affected.  I assure you, our experts from the Ministry would come and look at it and see what we can do to resolve it,” he assured.

The project is currently underway along the country’s shorelines to protect the tourism potentials at the beaches and the livelihoods of fisherfolk.

Francis Asenso Boakye was impressed at the rate of work of the contractor. The sea defence project was initiated following the devastating effect the sea was having on the shorelines of the country.  With 60% of the project completed, he believes the Government’s vision of protecting the shorelines was on course.

The Minister indicated that he was very impressed with the work done so far. According to him, the government’s strategy is to grow the economy to maximize the gains as well as protecting lives and property.

Acting Director of the Hydrological Services Department of the Ministry, Hubert Osei Owusu-Ansah, said the residents, who are mainly fishermen, would have a serene waterfront to go about their activities when the project is complete.

“You know the waves travel and as they hit the shoreline, the speed is high and they are unable to dock their canoes. What we are doing is that we are building two breakwaters.  And this will calm the waters and allow the fisherfolk to work in peace,” he intimated.

He was awe-struck with the pace of work done by the Ghanaian contractor, Vuluxx Company Limited.

The Minister, before touring the sites, paid a courtesy call on the Oguaamanhen, Osabarima Kwesi Atta II and the Omanhen of the Edina Traditional Area, Nana Kojo Conduah.  He commended them highly for their immeasurable support for the contractor.c