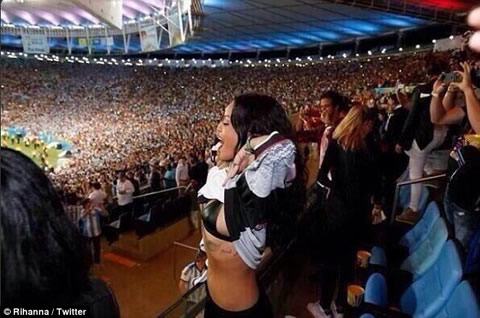 The entertainers became the entertained as Barbadian singer Rihanna joined the 75,000 fans at Brazil's Maracana stadium.

Rihanna, a demonstrated football fan chose to celebrate the 1-0 win after extra-time in the way that acutal footballers celebrate – lifting up the shirt. Only that unlike men's football, she showed her bra

Rhi-Rhi stirred up controversy a few weeks ago when she refused to, and even persisted in rooting against team USA.

Well lucky for her, USA is not playing in the World Cup Final. officially made her arrival in Brazil, and even met with Brazil soccer legend Pele.

She was also a supporter of  Colombia's James Rodriguez who claimed the Golden Boot award.

Colombia was knocked out by Brazil.