The four "most solid" buildings on Saint Martin, shared by France and the Netherlands, were destroyed, French Interior Minister Gérard Collomb said.

Significant damage is also being reported in the Dutch section.

The most powerful Atlantic storm in a decade first hit Antigua and Barbuda, before moving on to Saint Martin and Saint Barthélemy - the French holiday destination popularly known as St Barts.

Thousands of people have been evacuated from at-risk areas across the Caribbean. Residents have flocked to shops for food, water, and emergency supplies, and airports have closed on several islands which are popular holiday destinations.

In the US, Florida's Key West area has ordered a mandatory evacuation, with landfall expected at the weekend. 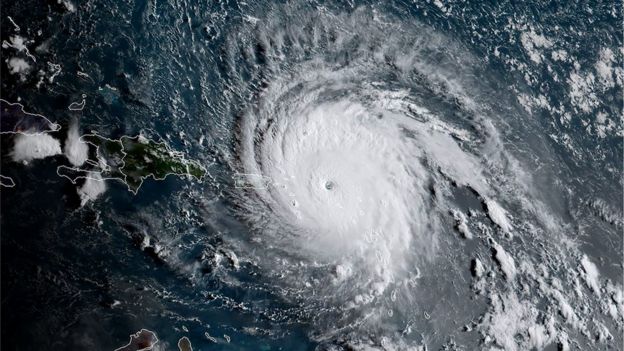 Irma as seen from space at 11:30 GMT on wednesday

The French government said earlier it was worried about thousands of people who had refused to seek shelter on the islands.

There was no immediate news of possible casualties but officials in the nearby French territory of Guadeloupe confirmed the following damage: 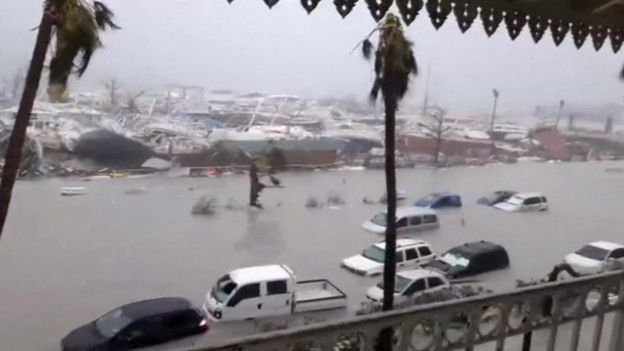 In the Dutch territory, known as Sint Maarten, the airport has been closed with photos showing debris strewn across the departures area and outside.

There has been a total power blackout, streets are littered with debris, cars are underwater and boats in the ports have been destroyed, Dutch broadcaster NOS reports (in Dutch).

France's interior minister said three emergency teams were being sent to the islands, two from France and one from Guadeloupe.

French Overseas Territories Minister Annick Girardin said the hurricane had caused major flooding in low-lying areas, and coastlines were being "battered extremely violently" by the sea. 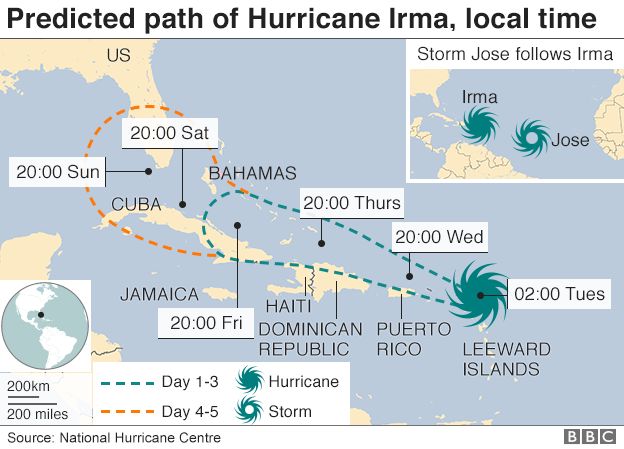 Some islands in the region are almost at sea level and any significant storm surges would be potentially deadly, the BBC's Will Grant reports from Havana.

Antigua escaped major damage, with no loss of life, Prime Minister Gaston Browne said on Facebook, but the situation on Barbuda is unclear.

"We're trying to be positive, but nobody's really going to relax over here. It's a very close-knit community of just 90,000 people. Most people live here on Antigua, there's about 2,000 on Barbuda, so lots of people right now are waiting very anxiously for word from their relatives over there."

US President Donald Trump has declared a state of emergency for Florida, Puerto Rico and the US Virgin Islands, mobilising federal disaster relief efforts.

In Florida's Key West, visitors will be required to leave on Wednesday morning, with residents due to follow in the evening.

"Watching Hurricane closely," Mr Trump tweeted on Wednesday. "My team, which has done, and is doing, such a good job in Texas, is already in Florida. No rest for the weary!"

Parts of Texas and Louisiana are dealing with the damage done by Hurricane Harvey in late August. But it is not yet clear what impact Hurricane Irma might have on the US mainland.

A third tropical storm, Jose, has formed further out in the Atlantic behind Irma, and is expected to become a hurricane later on Wednesday, according to the US National Hurricane Center.

Seeing multiple storms developing in the same area of the Atlantic in close succession is not uncommon.

Rarer though is the strength of the hurricanes, with Harvey making landfall in the US as a category four.

There have never been two category four storms making landfall on the US mainland during the same season, since records began.

Asamoah Gyan out for three weeks

7 deeply troubling lessons I learned from being ‘The Other Woman’