"So many lives have been changed forever," he said. "So many families have lost everything."

Hurricane Michael struck on Wednesday with winds of 155mph (250km/h).

It weakened to a storm as it moved inland towards the north-east, but at least six people have died, most of them in Florida.

More than 370,000 people in Florida were ordered to evacuate but officials believe many ignored the warning.

Which areas are worst affected?

Michael ploughed into Florida's Panhandle coast near the town of Mexico Beach at 14:00 (18:00 GMT) on Wednesday, one of the strongest storms to ever hit the US mainland.

Ranked four on the five-step Saffir-Simpson scale and with a storm surge of 9ft (2.7m), it lifted homes from their foundations and heavily damaged others in districts closest to the sea in Mexico Beach, CNN helicopter footage showed.

Twenty survivors were found in the town overnight, AP reports, but 285 had refused to obey warnings to evacuate. 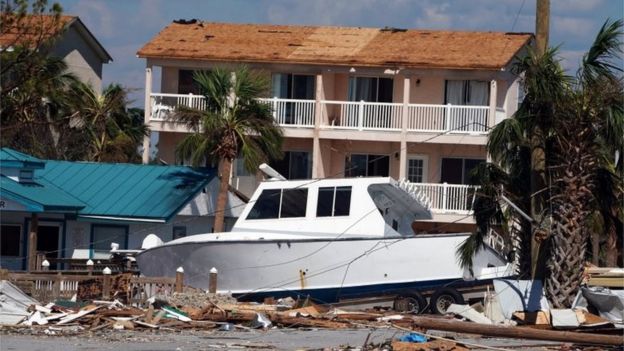 Apalachicola, with 2,300 residents, was also badly affected, the mayor reporting that downed cables were making it difficult to get through the town.

Debris and floodwater are also making some of the worst-hit areas difficult to reach.

Governor Scott urged residents not to return until the authorities "make sure things are safe", given the danger from power lines and other debris.

One of the first things you notice as you walk into Mexico Beach is the stillness.

No wind, almost no-one on the street, just the beating hot Sun and the debris: debris everywhere, tossed and scattered - the calling card of a monstrous storm.

And then you hear faint bleeping sounds coming from all directions - a dissonant symphony of high-pitched notes that turn out to be myriad small alarms, still transmitting their warnings from the batteries which power them.

On the left, as we walk, there's a mattress slumped at the roadside, on the right a Dean Noontz novel lies in the dirt.

Picking our way through a mass of rubble and detritus that was once a house, we spot an American flag on the ground; in amongst it all there is also a toy car and a cracked glass plate from a microwave.

A little further on, and a woman, accompanied by a friend, is sifting through the remains of her home, loading what she can salvage into the boot of a car. This was her dream retirement place she tells me - the last four years spent doing it up. "I'll never step back in there," she says through her tears.

The sheer force of Hurricane Michael has been well analysed, but it's only when you see the everyday stuff of people's lives crushed, broken, smashed to pieces, that you realise they will be living with this long after we have gone.

Who are the victims?

Six deaths have been confirmed - four in Florida, one in Georgia and one in North Carolina.

Florida officials say one man died when he was crushed in an incident involving a tree in Gadsden County.

In Seminole County, Georgia, a metal car-shelter lifted by a gust of wind hit a mobile home, killing a girl of 11. 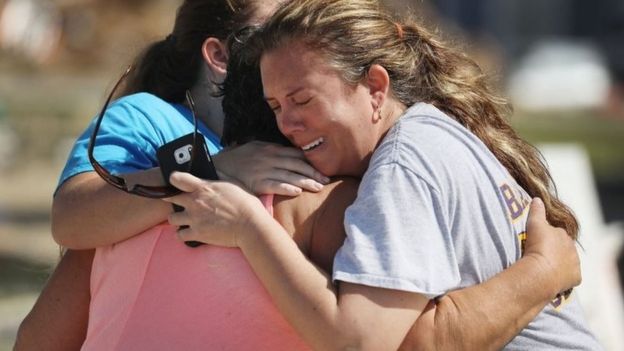 Michael earlier reportedly killed at least 13 people as it passed through Central America: six in Honduras, four in Nicaragua and three in El Salvador.

Winds have knocked out power to more than 900,000 homes and businesses across Florida, Alabama, the Carolinas and Georgia.

Around 6,000 are thought to have sought refuge in official shelters, mainly in Florida.

What is the storm doing now?

With reduced winds of 50mph, according to the National Hurricane Center (NHC), Michael has moved north-east crossing Georgia and is closing in on Greensboro, North Carolina.

The NHC warned that communities in north-west Florida and North Carolina faced the threat of life-threatening flooding as rising water moved inland from the coast.

The Carolinas are still recovering from the floods of Hurricane Florence.

States of emergency have been declared in all or parts of Florida, Alabama, Georgia and North Carolina.


How NPP plans to stop losing aspirants in primaries from running as independent candidates
We are working to reduce cost of doing business in Ghana - Akufo-Addo
NPP Primaries: Aspirants must show how they can maximise votes - Sammi Awuku
Trump impeachment trial opens as senators clash over rules
NDC, others suspend further demonstrations against new voters’ register
Why Lydia Alhassan is running unopposed in NPP primaries
3 things that only happen when you spend time being single that'll make your future relationship even better
Nigeria's ex-attorney general charged over suspected bribes

Take me to your leader! MPs to quiz robot