Lion Mama: The woman who fought off her daughter’s rapists

Nokubonga Qampi became known as the "Lion Mama" in South Africa after she killed one of three men raping her daughter and wounded the others. She was charged with murder - but after a public outcry the prosecution was halted, and she was able to focus her efforts on her daughter's recovery.

It was the middle of the night when the telephone call came, waking Nokubonga from her sleep.

The girl at the other end of the line was just 500m away - and she said Nokubonga's daughter, Siphokazi, was being raped by three men they all knew well.

Nokubonga's first response was to call the police, but there was no answer. She knew, anyway, that it would take them time to reach her village, in the rolling green and brown hills of South Africa's Eastern Cape province.

She was the only person that could help.

"I was scared, but then I was forced to go because it was my daughter," she said.

"I was thinking that when I get there, she might be dead... Because she knew the perpetrators, and because they knew her and knew she knows them, they might think they had to kill her so she couldn't report them."

Siphokazi had been visiting friends in a group of four small houses in the same village but had been left alone, asleep, when her friends went out at 01:30. Then three men who had been drinking in one of the other houses attacked her. 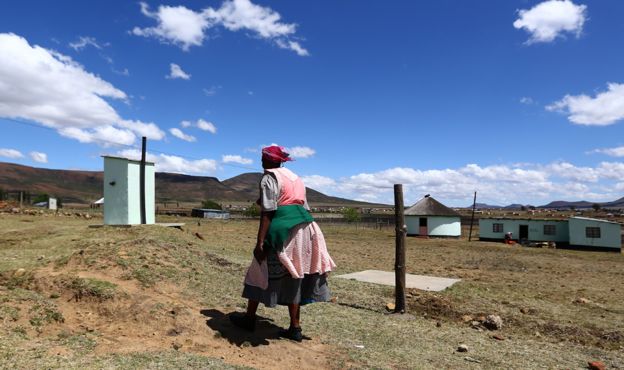 Nokubonga walks across her garden

Nokubonga's sparsely furnished hut has two rooms, a bedroom, where she had been sleeping, and a kitchen - where she picked up a knife.

"I took it for me, for walking the distance between here and where the incident was taking place, because it is not safe," she says. "It was dark and I had to use the torch on my phone to light the way."

She heard her daughter's screams as she approached the house. On entering the bedroom, the light from her phone enabled her to make out the awful sight of her daughter being raped.

"I was scared… I just stood by the door and asked what they were doing. When they saw it was me, they came charging towards me, that's when I thought that I needed to defend myself, it was an automatic reaction," Nokubonga says.

Nokubonga refuses to go into detail about what happened next.

The judge in the court case against the attackers said Nokubonga's testimony showed she had "become very emotional" as she saw one of the men raping her daughter, while the other two stood nearby with their trousers round their ankles, waiting to take their turn again.

Judge Mbulelo Jolwana went on to say, "I understood her to mean that she was overcome with anger." But in recounting the story now, all Nokubonga will admit to was fear - for herself and her daughter - and her face betrays only sadness and pain.

It's clear, though, that when the men charged at Nokubonga she fought back with her knife - and that as she stabbed them they tried to flee, with one even jumping out of a window. Two were seriously injured, and the other died.

Nokubonga did not stay to find out how badly hurt they were. She took her daughter to a friend's house nearby.

When the police arrived, Nokubonga was arrested and taken to the local police station, where she was kept in a cell.

"I was thinking of my child," she says. "I got no information [about her]. It was a traumatic experience."

At the same time, Siphokazi was in hospital worrying about her mother, imagining her in her cell and heartbroken about the prospect of her being jailed for years.

"I wished that if she spent time in prison, I would be the one who would serve it on her behalf," she says. 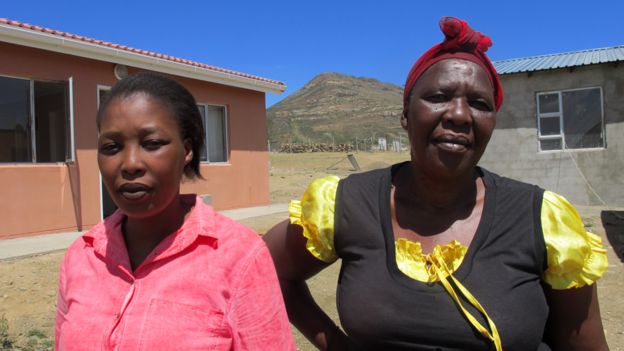 Siphokazi and Nokubonga in January, 16 months after the attack

Still in shock, she could remember little or nothing of the attack. What she now knows she heard from her mother when she arrived at the hospital two days later, after being freed on bail.

From that moment on they have been each other's emotional support.

"I didn't get any counselling but my mother has been able to assist me," Siphokazi says. "I am recovering."

Nokubonga's efforts are focused on ensuring that life continues just as it was before.

"I'm still the mother and she is still the daughter," she says. They share a laugh about the closeness of their relationship, joking that Siphokazi cannot get married, because then Nokubonga would have no-one to look after.

In the 18 months since the attack occurred they have come a long way.

Buhle Tonise, the attorney who represented Nokubonga, remembers that both seemed to have given up when she first met them, a week after the attack.

"The mother was distraught," she says.

"When you are meeting with people that are at that level of poverty, then you know most of the time they would feel that the mother is going to jail because she has no-one to stand by her side. The justice system is for those who have money."

As Buhle spoke to Nokubonga, Siphokazi watched her silently, as though the attack had deprived her of the power of speech.

Although Buhle says she was confident Nokubonga could argue convincingly that she acted in self-defence, she feared it would be a struggle to overcome her client's overwhelming pessimism. What neither of them had foreseen was the help they would get from the media, which ended up creating the legend of the Lion Mama. 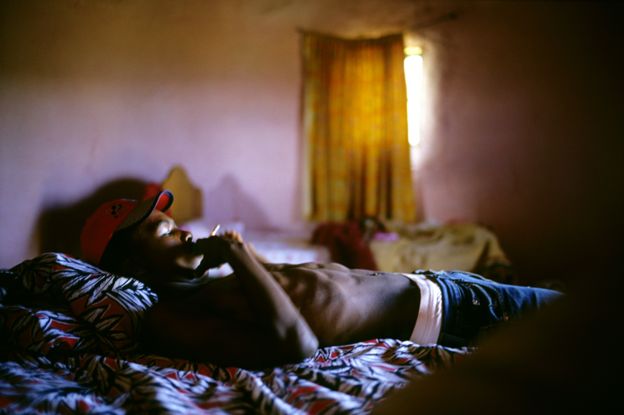 A youth rests in a hut in the village of Lady Frere, before commencing a traditional Xhosa manhood ceremony (2000)

It is rare in South Africa for a rape case to get more than basic news coverage. This may be in large part down to the sheer number of rapes in the country, estimated at around 110 per day - a situation President Cyril Ramaphosa recently labelled a national crisis.

The Eastern Cape province - the country's poorest, with unemployment of over 45% - has a higher level of rape per capita of population than any other. In Lady Frere, the village where Nokubonga and Siphokazi live, there were 74 recorded rapes in the year 2017/2018 - an astonishingly high figure for somewhere with a population of less than 5,000.

But among the numerous harrowing stories of rape in South Africa, Nokubonga and Siphokazi's story stood out. The press quickly latched on to the tale of a mother protecting her daughter. Unable to name Nokubonga, to protect her daughter's anonymity, one newspaper labelled her "Lion Mama", placing the story next to a picture of a lion and her cubs. The name stuck.

"For me, at first, I didn't like it because I couldn't understand," Nokubonga says. "But in the end I knew it meant I was a hero, because when you look at a lion it would protect its cubs."

The public responded by criticising the decision to charge Nokubonga with murder and raising funds to help her mount her legal defence. This raised her spirits, but the extent of the public support did not sink in until her first appearance in a local magistrate's court, a month after the attack.

"Going to court I was scared, I woke up and said a prayer," she says.

When she got there, she found the place was full of well-wishers.

"There were a whole lot of people from all over South Africa. What I said to people is thank you, because the fact that the court was filled to the rafters, it meant that they supported me. They really gave me hope."

She was quickly called before the magistrate.

"I was told the charges had been withdrawn," she says. "I just stood there, but I was excited, I was happy. At that moment I knew the justice system is able to separate right from wrong, they were able to tell I had no intentions of taking someone's life."

Buhle Tonise recalls the impact the magistrate's decision had on Siphokazi as well.

"After the case was withdrawn, she calls her daughter. For the first time ever I heard her daughter laugh. I think that's when [Siphokazi] said she also wants to see the guys going to jail."

They had to wait over a year for that to happen, but in December 2018 the two remaining attackers, 30-year-old Xolisa Siyeka and 25-year-old Mncedisi Vuba - members of the same clan as Nokubonga and Siphokazi - were each sentenced to 30 years in prison.

"I was happy about it," says Siphokazi, now 27. "I felt a bit safe, but a part of me just felt they deserved life imprisonment."

This is as close as Siphokazi gets to showing anger toward her attackers. 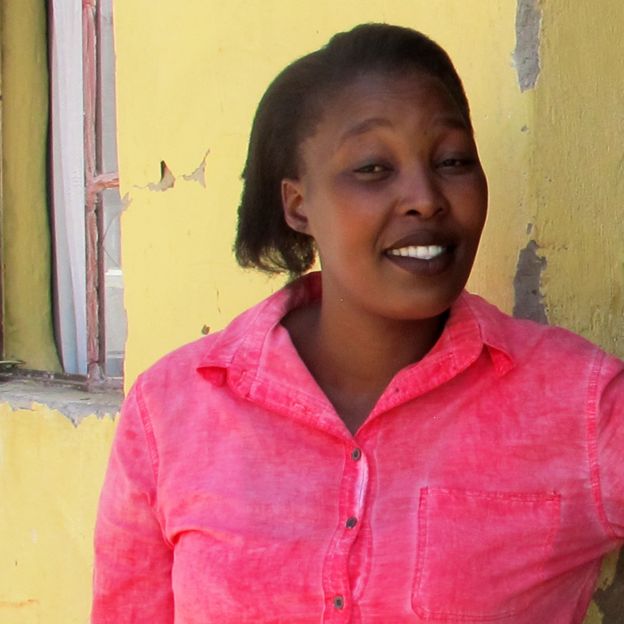 Once the case was finished, she decided to waive her anonymity in order to give encouragement to other rape survivors.

"I would tell a person that even after such an attack there is even life beyond it, you can still go back to society. You can still live your life," she says.

Nokubonga also shows a surprising lack of anger for someone compared by the media to a lioness.

In fact, she has hopes that her daughter's rapists can achieve something positive in the future. "I'm hoping that when they finish their sentence they'll come back as reformed or changed people," she says, "to tell a story about it and be a living example."

Cryptic pregnancies: ‘I didn’t know I was having a baby until I saw its head’