New Zealand police could conduct a high-speed mission to recover the bodies left on White Island after a volcanic explosion, police said.

It is one of the plans being considered as volcanic activity remains high, making any attempt to go there risky.

He said families would be consulted if this plan was implemented.

At least eight people are still thought to be on White Island, though police say there all presumed dead.

The volcano remains highly volatile, but families are growing increasingly "desperate" for bodies to be recovered.

Eight people are known to have died and 20 are in intensive care with severe burns.

In a press conference on Thursday, Mr Clement explained that a normal recovery operation would see police spending enough time at the scene to collect the evidence needed to ensure the bodies were all properly identified. 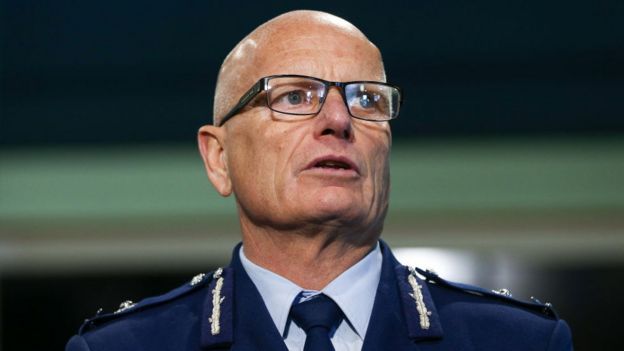 Mr Clement said the option was not without its trade-offs

A fast mission would mean recovering the remains quicker but with a "trade off".

"If you are the next of kin and we don't get an identification as a consequence of taking that process, they are not going to be happy and I would understand that," Mr Clement said.

GeoNet, New Zealand's geological hazard information site, said on Thursday there was a 50-60% chance of another eruption occurring within the next 24 hours.

"We are now living with a growing sense of desperation to bring home those that we know are there and those we love," Whakatane Mayor Judy Turner told reporters.

"The frustration of those families most affected is completely understandable."

The volcano, also known as Whakaari, erupted on Monday when at least 47 visitors from around the world were on the crater.