Sudan coup leader steps down after a day

The head of Sudan's military council has stood down a day after leading a coup that toppled long-time leader Omar al-Bashir amid a wave of protests.

The army has said it will stay in power for two years, followed by elections.

But protest leaders say they will not leave the streets until the military hands over to a civilian government.

Mr Ibn Auf was head of military intelligence during the Darfur conflict in the 2000s. The US imposed sanctions on him in 2007.

The new man in charge is also a top military figure, but the Associated Press news agency reports that his record is cleaner than other Sudanese generals. He is also said to have met with protesters to hear their views. 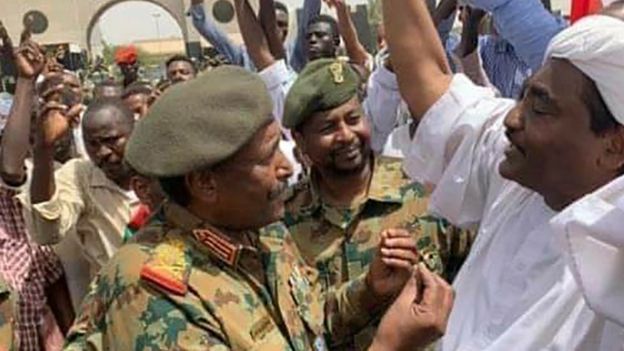 Lt-Gen Burhan could be seen talking to demonstrators on Friday

Mr Bashir has been indicted by the International Criminal Court (ICC) on charges of war crimes and crimes against humanity over the Darfur conflict.

However, the military council has said it will not extradite Mr Bashir, who denies the charges, although he may be put on trial in Sudan.

How did the latest drama unfold?

Despite Mr Bashir's removal on Thursday, demonstrators had refused to disperse, camping out outside army headquarters in the capital, Khartoum, in defiance of a curfew. 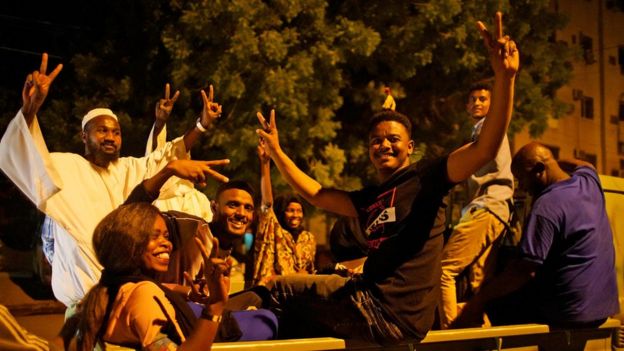 Demonstrators stayed out on the streets of Khartoum overnight

In its first response, the military council came out and denied it was seeking power, telling the protesters that they would decide the country's future, while the army maintained public order.

A few hours later, Mr Ibn Auf announced he was resigning and would be replaced by Lt-Gen Burhan.

"In order to ensure the cohesion of the security system, and the armed forces in particular, from cracks and strife, and relying on God, let us begin this path of change," he said.

Protesters celebrated his abrupt departure but the Sudan Professionals Association, which has been spearheading the demonstrations, later announced that the sit-in would continue.

"We call on the armed forces to ensure the immediate transfer of power to a transitional civilian government," they said on Facebook.

They further called for the abolition of "arbitrary decisions by leaders that do not represent the people" and the detention of "all symbols of the former regime who were involved in crimes against the people".

"Until these demands are fully met, we must continue with our sit-in at the General Command of the Armed Forces," the SPA said.

Meanwhile, police said at least 16 people had been killed by stray bullets at the protests on Thursday and Friday.