Former Indian finance minister Palaniappan Chidambaram has been arrested on charges of corruption and money laundering.

He is being investigated over allegations that he cleared foreign investments in exchange for bribes while he was finance minister.

Mr Chidambaram, 73, has denied the allegations.

A senior member of the main opposition Congress party and an MP since 1984, he has also served as home minister.

He was arrested by the Central Bureau of Investigation (CBI) on Wednesday evening amid chaotic scenes as supporters and media surrounded his car while being driven away.

The night before, officials arrived at his home in capital Delhi to question him, but said he was not at home.

Hours before his arrest, Mr Chidambaram approached the Supreme Court, a day after the Delhi high court rejected his application for bail. His lawyer told the court that the Bharatiya Janta Party-led government is carrying on a "politically-motivated vendetta" against Mr Chidambaram and his son, Karti, who is also implicated in the case. 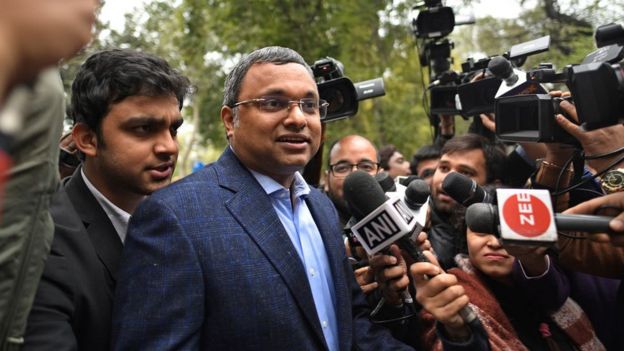 Both men are being investigated by the CBI and the Enforcement Directorate (ED), which investigates financial crimes.

The CBI arrested Karti Chidambaram in 2018, but he was later released on bail. He is a Congress MP from the southern state of Tamil Nadu.