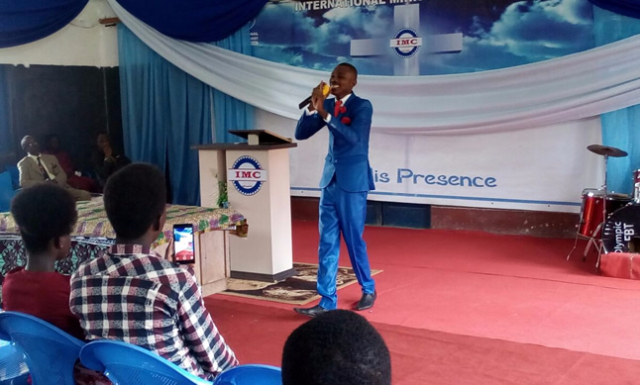 A young Police officer with the Swedru Divisional Police Command, Detective Lance Corporal Daniel Ofori Sackey, recently took his obsession with the gospel work to a new height when he took a breather from his rather busy security work to launch his maiden book, a devotional guide for Christians (new converts).

The 82 paged book, a result of months of meticulous research was launched at an impressive ceremony at the NAVTCO Assembly Hall, Agona Swedru.

The writer also provided insightful and pragmatic solutions to overcoming what he described as road blocks on the rough terrain in the life of believers, new converts in particular. Also detailed in there are the rewards that come with being a devoted and passionate Christian.

In his comments that heralded the official launch, Pastor Emmanuel Addison of the International Ministries of Christ, lauded the writer, describing him as a “dutiful and promising young cop with an uncommon passion for God’s work”.

“Hardly would you find young men of his background with his kind of drive and zeal towards the promotion of the Christian faith.

He described the book as a fine companion for all, especially persons of Christian background.

Asked what his motivation was in charting this new course, L/Cpl. Sackey said “My desire is to empower believers with the hard truth about the Christian journey”, adding “I am out there to use my gift of writing to impact lives”.  This is the first of my series of books in blueprint, he stated.

Daniel O. Sackey, is a 29 year old Detective Officer (a Lance Corporal) with the Agona Swedru Divisional Command of the Ghana Police Service.

A native of Odumase-Krobo in the Eastern Region and a product of the University of Cape Coast, Lance Corporal Sackey is famous for his craze about evangelism and soul-winning activities, aside his diligence at post as a Police Officer.

He is a consummate and courageous servant of God with distinctive flair for writing. He currently serves as the President of the Christian Evangelism Fellowship, a youth association with a national footprint that embarks on evangelism and mission activities.

In his chosen field as a security officer, Lance Corporal Sackey stands distinguished particularly in the area of “investigative policing” and is credited with most of the high-tech investigative works that led to unraveling some mysteries within his area of operation, winning him recognition in Police Service.