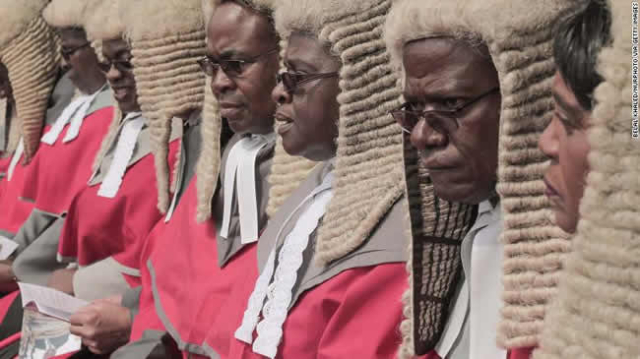 The Zimbabwe government has come under fire after it emerged that it spent thousands of dollars on importing legal wigs from the UK for local judges, with critics lambasting the purchase as a colonial hang-up and a waste of money.

Stanley Ginsburg, the owner of Stanley Ley, confirmed to CNN that his company had sold wigs to Zimbabwe, but he said the actual number of wigs ordered was "no way near the number" quoted by the Zimbabwe Independent.

Nonetheless, lawyers and rights campaigners have expressed anger at the purchase, arguing that the tradition of wearing expensive wigs represents a mismanagement of financial resources, and also fails to improve access to legal services for average Zimbabweans.

"The judicial wig (colonial) tradition continues in Zimbabwe with all its costs and controversy, without any meaningful benefit to access to justice," Arnold Tsunga, Africa director at the International Commission of Jurists, wrote on Twitter.

Hopewell Chin'ono, a leading Zimbabwean journalist and documentary filmmaker, wrote: "I have argued that this country suffers from a catastrophic mismanagement of resources. How do you explain a government allocating $155,000 for wigs to be bought in England when the same government is failing to buy bandages and betadine for infants in pediatric wards.

"These are people who shout about sovereignty and anti-colonial rhetoric and yet they are still wearing hideous wigs."

Chin'ono said the former colonial powers are "having a laugh" at Zimbabwe, stating: "You can take Zimbabwe out of the empire, but you can't take the empire out of Zimbabwe."

"In law, uniform is important — you look up to your judges and barristers," he said. "What is wrong with tradition?"

Wigs are still worn in countries such as Malawi, Ghana, Zambia, and in the Caribbean, while South Africa and many Australian courts have abandoned the practice.

On Thursday, a group of United Nations experts warned that the Zimbabwe government's policies aimed at tackling its fiscal deficit were pushing its people deeper into poverty.

Zimbabwe's Judiciary Service Commission did not immediately respond to CNN's request for comment.