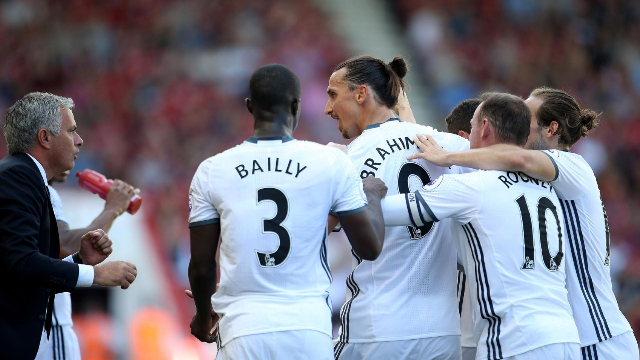 Zlatan Ibrahimovic opened his Premier League account with a lovely goal in a 3-1 win for Manchester United at Bournemouth.

The Swede struck from 25 yards to seal the victory for United as Jose Mourinho’s side began their campaign with a comfortable victory over Eddie Howe’s men.

United made a slow start to the match but were handed an opening goal on a plate five minutes before the half-time break when Juan Mata, constantly linked away from Old Trafford since Mourinho’s appointment, was played through on goal after a defensive mistake by Simon Francis before applying the finish.

Wayne Rooney, operating behind Ibrahimovic in United’s attack, doubled the advantage with a well-taken header on 59 minutes after good work from Antonio Valencia.

But it’s the former PSG talisman who will ultimately steal the headlines as he marked his league debut with a stunning strike five minutes later, leaving Arthur Boruc with no chance.

The hosts responded almost immediately with Adam Smith scoring a consolation goal on 69 minutes but it was ultimately too little too late for the Cherries.