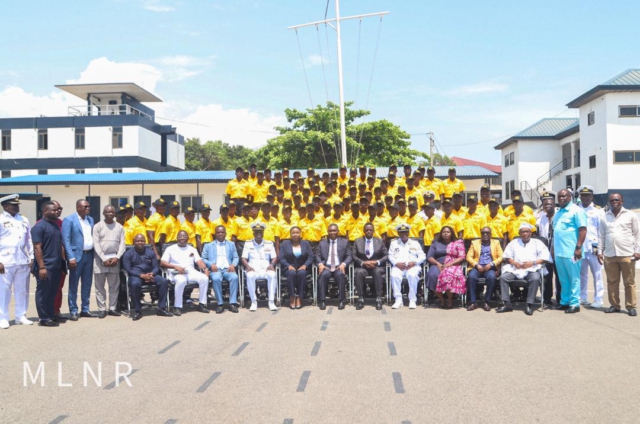 The First batch of 100 out of 300 River Wardens have successfully completed a 4-week intensive pre-deployment training course at the Eastern Naval Command in Tema on Tuesday, October 25, 2022.

The training is to prepare them in providing security to the country’s various river bodies to save them from further destruction as a result of illegal mining activities popularly called ‘galamsey’.

Speaking at the Passing Out ceremony, the Deputy Minister for Lands and Natural Resources responsible for Mines, George Mireku Duker indicated that the first batch of river wardens were drawn from districts along the rivers; Ankobra, Bonsa and sections of Pra and Tano.

He continued that the training methodology was aimed at developing swimming techniques, water confidence, boat handling among others and these he said were achieved through classroom lectures, practical demonstrations, physical training and drills.

The Deputy Minister said there is no shred of doubt that, this passing out ceremony further underscores the government’s determination to fight illegal mining across the country and build a responsible, viable and sustainable mining industry that will be beneficial to the state and the investment community at large.

He stated that the small-scale mining sector is a channel through which the country can build lots of local champions to meet the government’s target of ownership enhancement in the industry.

He touted a number of other efforts government has put in place to mitigate the illegal mining menace, sighting Operations Halt II, Community Mining Scheme, procurement of Gold Katcha Machines and Speed Boats and the recent engagement with Chiefs and MMDAs as a few examples.

Mr. Mireku Duker asserted that the statistics of Ghana’s mining sector contribution coupled with other indicators confirm the analogy that, small-scale mining is one of the key drivers of the country’s economy which needs to be properly regularised at all levels of operations.

In his address, the Deputy Mines Minister appealed to Ghanaians to see the fight against illegal mining as a national concern, particularly to communities along the various river bodies, who bear the brunt of these illegalities. He tasked them to be vigilant and support the government by reporting those involved in these activities.

Congratulating the wardens, he urged them to discharge their duties with patriotism, selflessness and integrity, adding that “daunting days lie ahead of you. The temptations of bribery, greed for money and many more are likely to sway you off your purpose, but I urge you to put on the armour of patriotism and above all, you are to foster peace and prosperity in the various communities through which the various river bodies flow.”

He also applauded some of the trainees who were awarded for their exceptional performance in various aspects of the training.

Six awards were given in all, ranging from Best swimmer, Best boat handler, best team leader, Best Physical Trainee, Best in Drill, and an overall best award for all the categories.

George Mireku Duker commended the Commanding Flag Officer, the training school and the instructors of the Eastern Naval Command for a job well executed.

The Flag Officer Commanding the Eastern Naval Command, Commander Emmanuel Ayesu Kwafo in his welcome address noted that this initiative by government is a valuable addition to the many efforts to curb illegal mining.

He hopes that the partnership will go a long way to help bring a total end to illegal mining in river bodies and the general wanton destruction of lands and natural resources of the country.

Commander Ayesu Kwafo said they are committed to training more people to bring about quality of life to the people of Ghana, adding that the Ghana Naval Command will avail itself for any other training and collaboration in the near future.

To the wardens, the Commanding Officer said he is impressed with their dedication and commitment to the training, especially to the only 3 women in the group for their toughness.

He also challenged them to use every opportunity to educate the people of their native towns, of the vast effects of illegal mining and urged them to, “see yourself as the nation’s ambassadors for clean rivers in Ghana and to do this well you must maintain your physical fitness at all times”

The River warden training course forms part of a collaborative effort between the Ministry of Lands and Natural Resources, the Minerals Commission and the Ghana Navy with the aim of protecting Ghana’s River bodies against illegal mining activities

DISCLAIMER: The Views, Comments, Opinions, Contributions and Statements made by Readers and Contributors on this platform do not necessarily represent the views or policy of Multimedia Group Limited.
Tags:
George Mireku Duker
Illegal mining
Water bodies