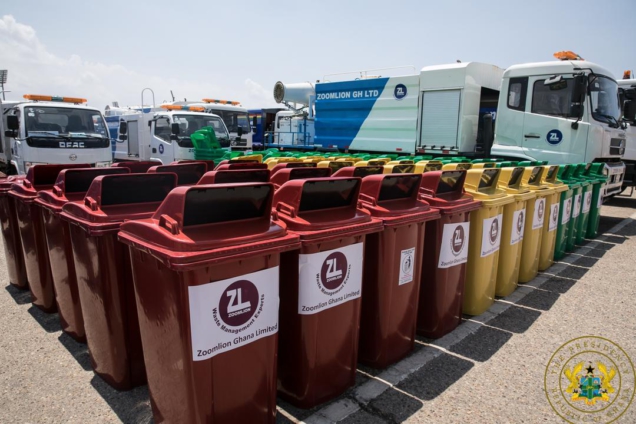 Thirteen C40 cities, including Accra in Ghana, have joined the Pathway Towards Zero Waste initiative, committing to a 2030 target of providing timely city-wide waste collection services, treating at least 30% of organic waste, and reducing waste disposal emissions by at least 30%.

With waste accounting for up to 35% of total municipal emissions in Global South cities, the commitment will have a massive climate impact by reducing up to 1 million tonnes of methane emissions per year.

The environmental impact of this savings is significant. According to experts, 1 kilogram of food waste dumped has the same global warming potential as burning one litre of gasoline, with methane contributing 87 times more to global warming than CO2 in the short term.

According to the UN Intergovernmental Panel on Climate Change, reducing methane emissions is the quickest way to combat global warming.

According to research, every 1kg of food waste disposed of in dump sites and landfills pollutes not only the soil and underground water, but also has the same climate impact as burning 1 litre of gasoline.

Scientists have also agreed that, waste is a significant contributor to municipal emissions in most Global South cities, including those in Africa, Latin America, the Middle East, and Southwest Asia, and in some regions can account for up to 35% of total municipal emissions, primarily from methane generated at dumpsites and landfills.

This is extremely harmful to the environment, as figures show that methane contributes 87 times more to global warming than CO2 in the short term.

Available figure show that, every year, C40 cities in the Global South emit more than 2 million tonnes of methane.

To achieve these goals, cities may implement a variety of interventions, such as the construction of sanitary landfills (with landfill gas capture), the improvement of informal sector working conditions, the implementation of a comprehensive recycling system and waste segregation framework, the phase-out of organic waste disposal, the restriction of single-use items, and the phase-out of non-recyclable materials.

C40 believes this commitment to waste and organics recovery will have a huge impact on the climate, health, food and water security, economic opportunity, and soil restoration.

Cities can also work to avoid the worst effects of climate change for this generation while also providing local benefits to our communities by reducing food waste disposal and improving waste operations and infrastructure.

Many C40 cities, according to C40, are already making significant progress toward meeting this commitment.

They cited Sao Paulo’s implementation of composting for fruit and vegetable markets, which resulted in the collection and treatment of 7,100 tons of organic waste between January and August of 2020.

This resulted in the production of 1,400 tons of compost, which was then used as fertilizer in municipal parks.

Rio de Janeiro has worked with the informal sector to increase representation. Greater Accra is also used as a case study, with C40 saying that increased recognition has formalized the positions of 850 workers and increased waste collection by 10%, as well as Addis Ababa, which has enlisted community cooperatives to increase organics treatment capacity and reduce uncollected waste and disposal.

Cities like Buenos Aires have implemented waste cooperatives, which have assisted in formalizing informal waste collectors, increasing recycling rates, and improving living conditions. The implementation of a citywide two-stream segregated collection has resulted in a reduction in waste disposed at landfills, while a food waste collection initiative, via drop-off sites for households, has helped residents form new habits.

In Durban, the emphasis on world-class, cost-effective, sanitary landfill conservation and reforestation efforts that have helped generate jobs and transformed exhausted landfills into conservation areas for local wildlife has also been mentioned.

“Waste is one of the key areas for which city governments are responsible, and taking this step will make cities cleaner, healthier, more resilient, create better jobs and reduce 1 million tonnes of methane emissions each year. We hope these pioneer C40mayors will provide inspiration to Global South cities across the world who are looking to slash pollution while creating better jobs and improving public health,” he said.

The Mayor of Amman, His Excellency Dr. Yousef Al-Shawarbeh, stated that the city is committed to leading the way in integrating solid waste management and combating climate change.

“Partnering with the private sector and heading towards zero waste will beneﬁt all of our community members as we reduce carbon emissions, become more resilient to global heating and create good, green jobs within a healthier, less polluted and resource-friendly city.”

Buenos Aires Mayor Horacio Rodrguez Larreta also stated that leading the way toward waste reduction and proper waste management with other cities around the world is a fantastic opportunity for concrete action in the fight against climate change.

“Urban waste is one of the largest sources of greenhouse gas emissions, and its correct management is one of the greatest challenges that cities face on a daily basis.”

According to him, such measures will make cities cleaner, healthier, more resilient, and more inclusive.”
Curitiba Mayor Rafael Greca stated that cities will work together to share this initiative and find solutions to climate challenges.

“Our commitment is a preventive measure to ensure that our cities are cleaner, healthier, smarter and more resilient for future generations, while providing decent work conditions to waste pickers, our fellow citizens. Through this initiative, we also hope to strengthen local reuse and recycling capacity in order to achieve our goals.”

“EThekwini Municipality is making a commitment to take up the Pathway Towards Zero Waste,” said Durban Mayor Mxolisi Kaunda. Our pledge with the proposed actions should prove our ambitions for a transformative waste management process towards waste reduction. Our commitment also substantiates the principles within our Durban Climate Change Strategy as well as the implementation of the Deadline 2020 Climate Action Plant targets.

“The associated opportunities also align well with our COVID-19 Economic Recovery Plan, which calls for inclusive green economy. EThekwini Municipality’s commitment towards a waste free city will form a vital component in achieving our vision to become the most livable and sustainable city.”

“With regards to solid waste management, the Metropolitan District of Quito is committed to the implementation of a new management model which, aligned with the framework of ‘citizen co-responsibility,’‘ zero waste’ and ‘inclusive circular economy,’ prioritises waste prevention, reduction and recovery,” said Quito Mayor Santiago Guarderas Izquierdo.

“The City of Tshwane is committed to promoting climate-smart waste management through innovative waste minimisation, separation, recycling, and transportation,” said Tshwane Executive Mayor Randall Williams. As part of this initiative, the City will prioritize diverting organic waste from landfills, increasing the rate of timely waste collection services, especially in informal settlements, and partnering with the private sector to sustainably process and treat waste. I look forward to collaborating with C40 and other key stakeholders to accelerate the achievement of the Pathway Towards Zero Waste and build a more sustainable, healthier and economically vibrant capital city.”

C40 is a network of nearly 100 mayors from the world’s leading cities working to deliver the immediate action required to address the climate crisis and create a future in which everyone, everywhere can thrive.

C40 mayors are committed to using a science-based and people-centered approach to help the world limit global warming to 1.5°C while also building healthy, equitable, and resilient communities. Mayors are working with a broad coalition of representatives from labor, business, the youth climate movement, and civil society to go further and faster than ever before through a Global Green New Deal. Sadiq Khan, Mayor of London, is the current Chair of C40, and Michael R. Bloomberg, three-term Mayor of New York City, serves as President of the Board.

DISCLAIMER: The Views, Comments, Opinions, Contributions and Statements made by Readers and Contributors on this platform do not necessarily represent the views or policy of Multimedia Group Limited.
Tags:
Accra
Public Health