15 Assembly members and others granted bail for cursing Regional Minister 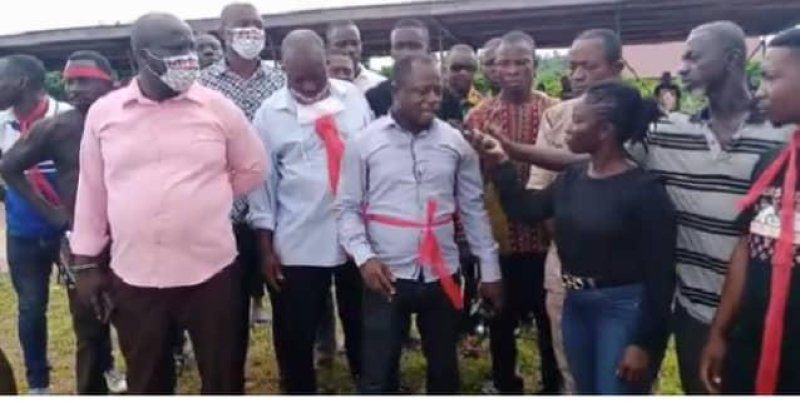 Fifteen aggrieved Assembly Members who together with three others, invoked curses on specific political and public officials in the Central Region, have been granted GHC5,000 bail each with a surety each, by the Assin Nyankumasi Magistrate’s Court.

They all pleaded not guilty to the charges of offensive conduct, contrary to section 207 of Act 29/60 and provoking the breach of the peace in the Assin South Area.

Chief of Assin Nsuaem, Nana Kwabena Wadie III, had during proceedings, pleaded with the Court presided over by Mr Samuel Etsie Jnr, for an out-of-court settlement which was granted and the case was adjourned to Friday, November 5, 2021.

Police officer prosecuting, Inspector Abdullai Moro said the accused persons, on Thursday, October 7, 2021 at about 12:00hrs, at the forecourt of the Assin South District Assembly Office, slaughtered a ram, poured bottles of Schnapps and broke eggs to invoke curses on the officials, including the Central Regional Minister, Mrs Justina Marigold Assan.

According to the Prosecutor, among the curses were that “the gods will deal with you and your children will be used to pacify the gods”.

It may be recalled that 15 aggrieved Assembly Members were denied their constitutional rights of taking part to confirm the District Chief Executive for the District, after they missed the date for the confirmation.

When they heard that the event was taking place without them, they besieged the forecourt of the Assin South District Assembly with bottles of schnapps, eggs, and slaughtered a ram and rained curses on the officials.

DISCLAIMER: The Views, Comments, Opinions, Contributions and Statements made by Readers and Contributors on this platform do not necessarily represent the views or policy of Multimedia Group Limited.
Tags:
Bail
Central Region
Curse
Regional Minister