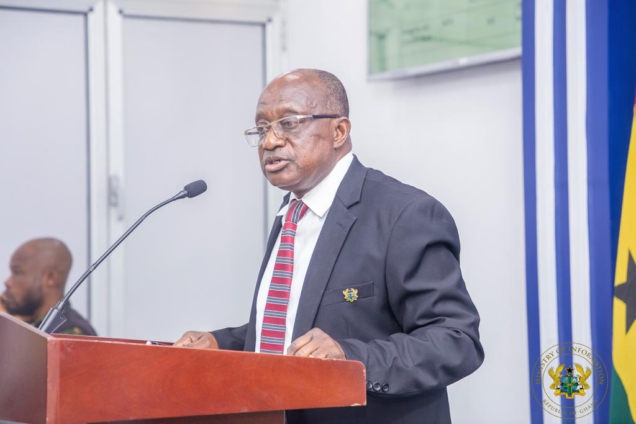 The Ashanti Regional Minister, Simon Osei-Mensah says the Akufo-Addo-led administration since 2017 has constructed a total of 1,515 kilometres of road in the Ashanti Region.

This figure he said is more than double the 503.44 kilometres of road constructed in the region under the erstwhile administration.

Taking his turn at the Minister’s press briefing, a weekly platform put together by the Ministry of Information for Regional Ministers to provide updates on developments in their regions on Wednesday, August 24, 2022, Mr Osei-Mensah said the road projects are a manifestation of how the Ashanti Region is a top-most priority to the government.

“Since 2017, the region has seen 336 separate road contracts with a total length of 6,498.75km. Out of this, 1,515.06km have been completed. Department of Urban Roads has awarded 64 contracts. When you come to the Ghana Highway Authority, they have also awarded 69 contracts and then Feeder Roads has the largest which is about 203 contracts, all summing up to the figure of 336,” the Regional Minister said.

He said the construction of the roads coupled with the numerous developmental projects in the region will help boost socio-economic activities, particularly when the region plays a critical role in the country’s development.

Providing updates on the much-anticipated Suame Interchange, the Minister said works on the four-tier interchange are set to commence soon following Parliamentary approval for a loan facility of €140million. He said the interchange when completed will ensure the free flow of traffic and reduce travelling time within the area and adjoining towns.

No health project has been abandoned

The Regional Minister also denied claims that some health projects in his region have been abandoned.

He said rather, government previously audited all health infrastructure in the country and has mobilized contractors to go to the site to complete health projects that were not completed by the erstwhile administration.

He assured that government will put in place the right measures to make sure the region gets its share of health infrastructure to complement the already existing ones.

On the redevelopment of the Kejetia Market, Mr Osei-Mensah said the Phase II of the market project will assist solve congestion problems in the area. The delay in the construction, he explained is a result of several setbacks suffered in moving traders to make way for the redevelopment.

However, he said the necessary engagements were done paving way for work to begin. The Regional Minister gave the assurance that the contractors are working around the clock to make sure the project is completed according to schedule.

DISCLAIMER: The Views, Comments, Opinions, Contributions and Statements made by Readers and Contributors on this platform do not necessarily represent the views or policy of Multimedia Group Limited.
Tags:
Ashanti Regional Minister
Covid-19
Road Construction
Simon Osei-Mensah