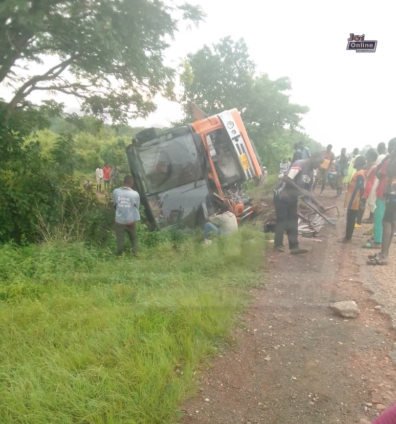 Sixteen people are currently receiving treatment at the Tamale Teaching Hospital after a Metro Mass Transit bus they were travelling in was involved in an accident.

Ten others who sustained minor injuries have been treated and discharged.

The Tamale-bound vehicle is reported to have had 67 occupants on board when the incident happened on Tuesday.

According to the passengers, the driver was sleeping behind the wheel and subsequently lost control over the vehicle.

The car, therefore, crashed into a bridge and somersaulted into a ditch at Kpalkori on the Tamale-Yendi road.

Speaking to JoyNews, Public Relations Officer of the TTH, Mohammed Misbow said the hospital first received 16 passengers who came in with various injuries and 10 others were brought in later.

He said all the passengers including two children are in stable condition.

The PRO added that ten have been discharged.