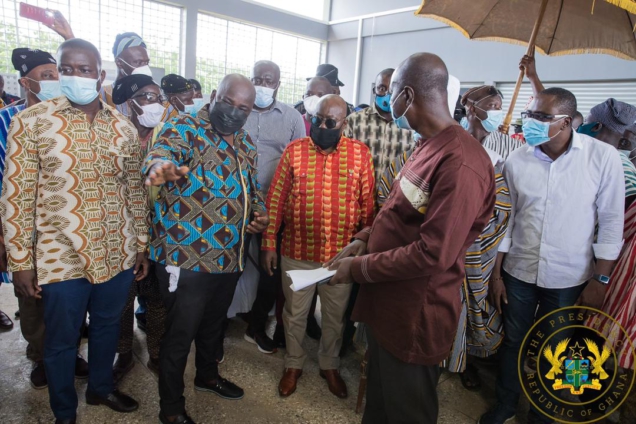 President Nana Akufo-Addo on Saturday commissioned a ¢7.3 million Savelugu rice processing factory, as part of his 2-day tour of the Northern Region.

The rice factory is a state-of-the-art rice facility with the capacity to produce between 1.5 and 2.8 tonnes of processed rice per hour.

The processing plants installed at the factory include modern parboiling, milling and packaging plants.

It has a standby generator plant and a mechanised borehole to supply the facility with water. It also has a fully furnished office accommodation for staff, a conference room, laboratory and a canteen/kitchen.

The Savelugu Rice Factory was constructed under the 1-District-1-Factory Common User Facility (CUF), an agro-industrial factory established by the Rural Enterprises Programme (REP) under the Ministry of Trade and Industry.

President Akufo-Addo was told that the factory will employ some employ about 118 people, including management professionals, factory floor workers, and plantation workers who will work on a nucleus rice farm.

In addition, over 600 farmers from Savelugu Municipality and neighbouring communities will be directly engaged to supply paddy rice for processing.

The other four are located at Kumawu, in the Ashanti Region, Hohoe in the Volta Region, Elmina in the Central Region and Dormaa Ahenkro in the Bono Region.

The five new TSCs are an upgraded version of and an addition to the original 26 Rural Technology Facilities (RTFs) established by REP, across the country in collaboration with GRATIS and the host District Assemblies.

The TSCs are set up to support government’s Industrialisation Agenda, particularly the 1D1F initiative.

To enhance the increased number of trainees, hostels facilities have been provided for both males and females at five of the older TSCs; and admit trainees from within and outside the districts/municipalities.