2 in critical condition after shooting over careless driving at Ayeduase 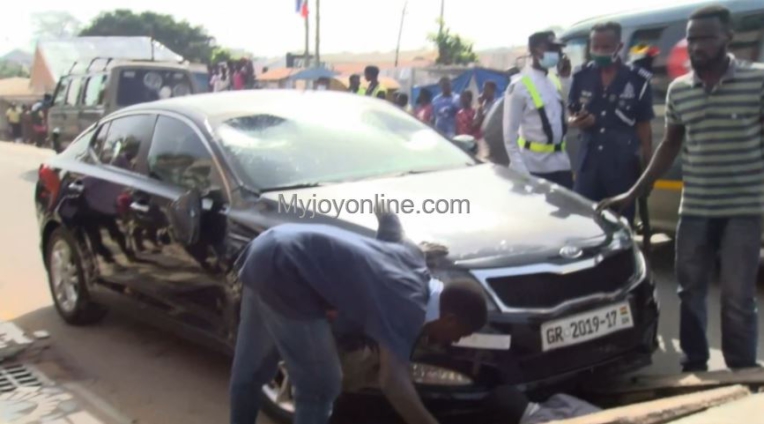 Two persons are in critical condition after a bizarre shooting incident in the Ashanti Region on Tuesday.

A driver of a KIA vehicle who was allegedly driving carelessly in Ayeduase was confronted by a painter who did not find it pleasant.

The argument ensued near Kwame Nkrumah University of Science and Technology (KNUST) campus during which the driver landed a hefty slap on the face of the painter, known as Amoah.

As the altercation got heated, Amoah retaliated with a slap of his own which forced the driver to walk back into his vehicle, according to eyewitnesses.

The visibly angry driver returned from the car with a pistol and fired three shots at Amoah’s stomach.

On the arrival of the police, a mob had massed up around the car of the suspect calling him out for his action while the victim was rushed to the Komfo Anokye Teaching Hospital.

Amid the chaos, the police officers cordoned to prevent the driver for being lynched and also effect his arrest.

Another eyewitness, narrated that; “they [the police] surrounded him, showed a gun to him and said he should come out from the car.”

“I think he was afraid so he just took his gun out and shot himself,” a resident, Dacosta Nii Addo told JoyNews.

The injured driver was also rushed to the hospital as investigations commence into the matter.

Ashanti Regional Correspondent Nana Yaw Gyimah reports that the two are under police guard at the Komfo Anokye Teaching Hospital and their statements will be taken when they are fit enough to provide them.

DISCLAIMER: The Views, Comments, Opinions, Contributions and Statements made by Readers and Contributors on this platform do not necessarily represent the views or policy of Multimedia Group Limited.
Tags:
Ayeduase
Driver
Painter
Shooting