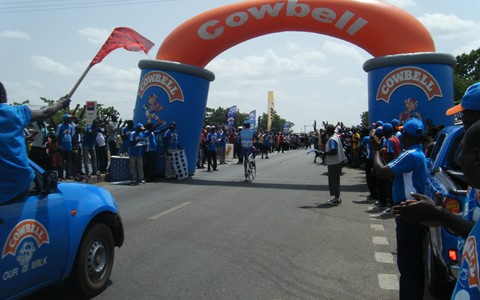 The 2014 Cowbell National Cycling Tour of Ghana will for the first time feature at least five clubs from other African countries.

This is in fulfilment of a statement made at the last edition’s launch by the organisers, Promasidor Ghana Limited (PGL), in partnership with Ghana Cycling Federation (GCF), National Sports Authority (NSA) and Ministry of Youth and Sports (MoYS).

The fourth edition of the cycling tour will see cycling clubs coming from countries like Kenya, Benin, Togo, Ivory Coast and Nigeria compete against other 7 Ghanaian cycling cubs.

Seventy-two professional cyclists would represent from all these 12 teams to battle for the ultimate price at stake.

This year’s edition is expected to kick start from May 4, 2014 to May 17, 2014. Meanwhile, the organisers are yet to settle on a date for the official launch of the event.