2018 WCQ: Ghana see off Comoros in Kumasi to progress to group stages

Ghana produced a somewhat reserved performance against Comoros yet found enough in the tank to beat Comoros 2-0 to qualify for the third round qualifying round of the World Cup Qualifiers.

A goal in each half from Mubarak Wakaso and Jordan Ayew ensured Comoros caused no upset on a day when many expected Ghana to trounce their opponents from the Southern African state.

The game was by far and large played at walking pace with Ghana comfortable knocking the ball amongst themselves in defence.

The Coelacanths came into the game with the gameplan similar to what they used in Moroni 4 days ago. They planned to sit deep and catch Ghana on the counter and for the first 20 minutes, their plan worked according to plan.

They threatened the most in the opening and almost found the net when a rasping shot by Ahmed Mogni hit the post.

This seem to have wakened the Stars a bit who began to pass the ball around a bit quicker without much penetration. On one of their forays forward, skipper Asamoah Gyan was fouled on the edge of the box and upstepped Mubarak Wakaso.

The Las Palmas midfielder expertly converted the free kick into the top roof of the night to the sheer delight of the fans in Kumasi. 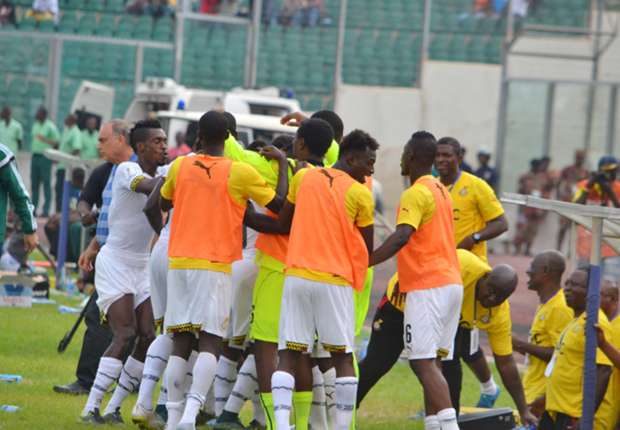 The rest of the half was relatively drab with chances few and far between both teams. Injuries to Jonathan Mensah and Solomon Asante meant the pattern was further disrupted with the introduction of Daniel Amartey and Jeffrey Schlupp.

The second half followed a similar pattern in the opening parts with Ghana threatening down the left flank as Jeffrey Schlupp and Baba Rahman combined effectively a couple of times without really threatening the goal.

Comoros gradually found their feet and began to attack Ghana a bit more to the detriment of the defence. The game became a bit stretched as the game ended up becoming an end to end affair.

Ghana created two glaring chances with Asamoah Gyan missing a sitter after being played through by Dede Ayew while Dede himself missed a header after a fine cross by Schlupp.

With ten minutes to go, Comoros problems were further deepened when defender Kassim Omar was sent off for a second bookable offence onJordan Ayew. The Aston Villa made the man advantage count when he got Ghana’s second goal after showing some good feet in the box to place the ball into the top roof of the net.

Avram Grant made his last change giving WAFA attacker Samuel Tetteh his Ghana debut as he replaced Asamoah Gyan. The Ghana captain had a pretty off day by his standards and his wait to hit 50 goals has been prolonged.

On the whole, credit must go to Comoros for making a good game out of this and for the Black Stars, bigger tests lie ahead of them as they seek to make it to the World Cup for a fourth consecutive time.

This game was live on SuperSport, your world of champions.