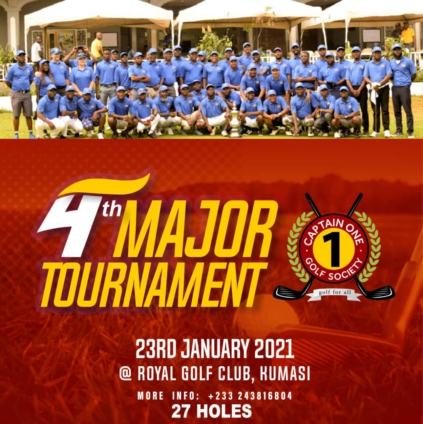 About 100 golfers will compete in this year’s Captain One Invitational Championship slated for the Royal Golf Club in Kumasi on Saturday, January 23.

The event, the fourth major tournament, would see both amateur and professional golfers battling for a giant trophy, medals and other attractive prizes.

The 27 holes event would be held under the theme, “Golfing in Uncertain Times,”.

Organizers have expressed commitments to ensuring that all safety protocols are in place to ensure the safety of golfers amidst the COVID-19 outbreak.

Speaking ahead of the event, President of the Captain One Golf Society, Mr Pius Ayeh Appiah said, participants would be limited to 100 in adherence to social distancing protocols.

“Golf in nature, is a ‘social distancing’ sport as players play individually on the course and not in groups. That notwithstanding, there would be wearing of face mask, hand sanitizers, soap and water would be available for regular washing of hands,” he stated.

He added that, they would leave no stone unturned in ensuring the safety of golfers considering the second devastating wave of the pandemic.

“This year promises to be exciting because it would be a huge battle between the professionals who were overthrown by an amateur golfer last year.”

The first two events were won by professional golfer, Prince Amponsah with amateur golfer Frank Kweku Antwi coming up strongly to take over the crown from his Obuasi Golf Club mate last year.

The two would be expected to go at each other this year while the host club Royal Golf Club would also be hoping to host and win the event as done by Obuasi Golf Club last year.

“Golfers from other clubs would also be in the challenge for the ultimate trophy and the bragging rights at stake which would make the event highly competitive,” Mr Appiah stated.

He urged corporate Ghana to come on board to support the competition while expressing appreciation to R K Cliste, Mosat Photography, Industrial Procurement Services and Flo Polo Designs for supporting the event.

On his part, Vice Captain of the club, Mr Richard Boateng was upbeat about this year’s event following very competitive monthly medals ahead of the major competition.

“Everyone is determined to put in a fight and the Royal Golf Club is set to host one of the most competitive events in the country,” he said.

He said the society was committed to developing golf in the country especially among people from less privileged communities hence their mantra “GOLF FOR ALL.”

DISCLAIMER: The Views, Comments, Opinions, Contributions and Statements made by Readers and Contributors on this platform do not necessarily represent the views or policy of Multimedia Group Limited.
Tags:
Captain One Golf Society
Golf Tournament
Kumasi