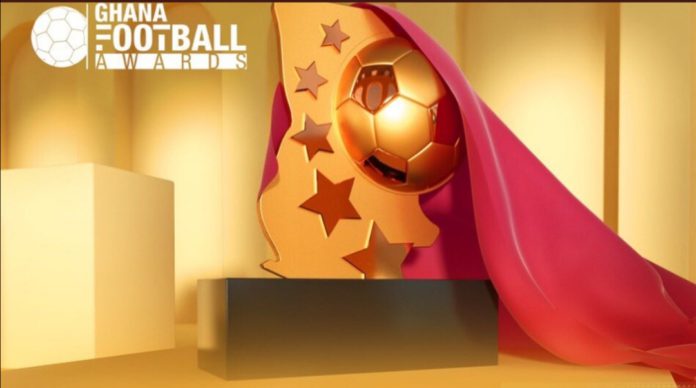 Three Black Stars players – Andre Ayew, Kudus Mohammed, and Gladson Awako – will headline this year’s edition of the Ghana Football Awards which comes off on Saturday, July 3, 2021, at the Grand Arena, Accra.

The trio has been shortlisted for the prestigious Ghana Footballer of the Year Award which is the flagship category of the awards scheme.

One of the three will take over from Arsenal star Thomas Partey who emerged as the winner in the two previous editions of the awards.

This was made known during the Nominees Announcement on Wednesday, June 16, 2021 on Joy Prime, Asempa FM and Adom TV.

Andre Ayew, Kudus Mohammed, and Gladson Awako will lead several Ghanaian players, both home and abroad as well as foreigners playing in the Ghana League who have performed well under the year in review to be celebrated for the exploits.

While the Ghana Footballer of the Year remains the flagship award, other categories such as the Homebased Football of the Year, Goal of the Year, Most Vibrant Club on Social Media and Club CEO of the Year are all likely to generate more excitement.

The Nominees Announcement, which was graced by former Blacks Star international John Paintsil, and the Head of Communications of the Ghana Football Association, Henry Asante Twum as well as Felix Romark and Cleopatra Nketiah who are all members of the Awards Board were also on the show.

The Board Members expressed satisfaction at the work they have done and implored the public to support their favourite nominees in the various categories by voting massively for them to win the awards.

It has also become a night where Ghanaian footballers scattered all over the world converge to unwind and escape from the pressures of the just-ended season.

It has been a great journey of recognizing the sacrifices of football who break their sweat not only for their respective football clubs but also for their beloved motherland, Ghana.

Find all the nominees for the various categories below:

FOOTBALLER OF THE YEAR

WOMEN’S FOOTBALLER OF THE YEAR

MEN’S COACH OF THE YEAR

WOMEN’S COACH OF THE YEAR

GOALKEEPER OF THE YEAR

HOME-BASED FOOTBALLER OF THE YEAR

GOAL OF THE YEAR

MALE TEAM OF THE YEAR

FEMALE TEAM OF THE YEAR

MOST VIBRANT CLUB ON SOCIAL MEDIA

Other honorary awards that will be awarded on the awards night include:

DISCLAIMER: The Views, Comments, Opinions, Contributions and Statements made by Readers and Contributors on this platform do not necessarily represent the views or policy of Multimedia Group Limited.
Tags:
Ghana Football Awards